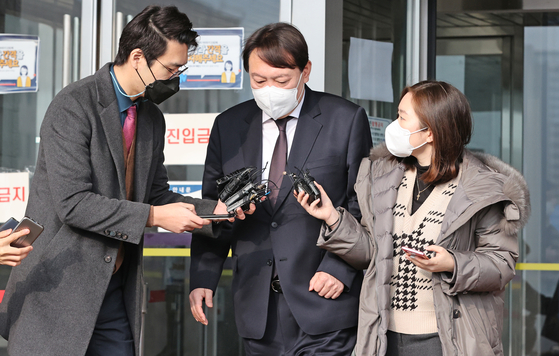 
Prosecutors dropped a case against their boss, Prosecutor General Yoon Seok-youl, of abuse of power for ordering investigations of judges in hot-potato trials.

The Seoul High Prosecutors’ Office on Tuesday announced it ended a probe of Yoon after concluding Monday there was no evidence that he authorized prosecutorial monitoring of judges assigned to criminal trials involving former Justice Minister Cho Kuk.

Various figures involved in drawing up reports on the judges, including Yoon himself, were interviewed as part of the probe, but it couldn't be concluded that Yoon’s actions constituted abuse of power, the office said. Several court precedents were examined and legal reviews conducted to arrive at the conclusion, it added.

The alleged illegal monitoring of judges — which implied a serious breach of judicial independence — was perhaps the most serious of accusations that prompted the Ministry of Justice to hold disciplinary proceedings against Yoon last year.

A report on one judge drawn up by prosecutors included notes about her membership in a prominent legal research group associated with liberal causes, something the ministry claimed was an attempt by the state prosecution service to identify judges who would not be disposed to rule in its favor.

Justice Minister Choo Mi-ae used the case as one of several reasons to suspend Yoon from his duties in November, though an administrative court subsequently overturned that order through an injunction.

Yoon’s lawyers argued collecting information about a judge’s background and prior rulings from open databases is an ordinary part of the prosecution’s job used to help them better argue cases.

The ministry ordered the Supreme Prosecutors’ Office, the top prosecutorial branch headed by Yoon himself, to investigate the allegation last February. The case was later referred to the Seoul High Prosecutors’ Office based on suspicions of conflict of interest.

While the office’s conclusion on Monday means prosecutors won’t pursue criminal charges against him, Yoon may not yet be in the clear.

A court case is currently ongoing between the top prosecutor and the Justice Ministry regarding the legality of the ministry’s disciplinary hearing against him last year.

The subject of judicial monitoring is likely to be discussed at the trial, though any court verdict may only surface after Yoon’s term ends this July.

Yoon’s critics argued the state prosecution service’s decision to drop a case against its boss only reinforces the claim that the agency treads lightly when it comes to its own.

The claim holds particular salience in the backdrop of the launch of the new Corruption Investigation Office for High-ranking Officials (CIO) — a body specifically designed to check the powers of the prosecution service, and with powers vested to probe crimes committed by prosecutors themselves.

Figures from the ruling Democratic Party suggested Yoon may be subject to investigation by the CIO regarding corruption allegations involving his family.