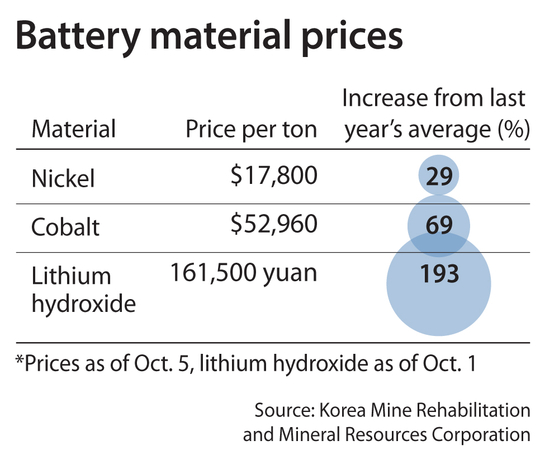 Demand for batteries is rising as more electric vehicles (EVs) hit the roads, and companies are scrambling to acquire key battery materials amid a supply shortage.

According to market tracker Benchmark Mineral Intelligence, there is already a lithium supply shortage that will grow from 10,000 tons this year to 189,000 tons in 2025. Market analysis firm Commodities Research Unit announced that global demand for nickel was 2.39 million tons last year, and is expected to grow to 3.32 million tons in 2024.

“Key material prices are drawing a steep upward curve due to a supply shortage,” said Cho Chul, a researcher at the Korea Institute for Industrial Economics and Trade.

Key materials like lithium, nickel and cobalt make up one-third of battery costs, and the ability to acquire them will determine the competitiveness of battery companies and even EVs.

“We mostly rely on imports for materials to make batteries,” said Sohn Jung-soo, a researcher at the Korea Institute of Geoscience and Mineral Resources. “We need to start obtaining the raw materials that we're importing by ourselves.”

Local battery makers are focusing on nickel and cobalt supplies. LG Energy Solution invested 35 billion won in Shanghai-based raw material producer Greatpower to acquire a 4.8 percent stake. With that deal, Greatpower will supply LG Energy Solution with 20,000 tons of nickel for six years starting in 2023. According to LG Energy Solution, that amount is sufficient to produce batteries for more than 300,000 EVs.

The company also signed a purchase deal with Queensland’s Australian Mines in August to purchase 71,000 tons of nickel and 7,000 tons of cobalt over six years starting from the end of 2024.

A spokesperson for Samsung SDI said it can’t reveal sourcing deals for key materials, but it's working on them.

Hyundai Motor in September began construction of an EV battery plant in Indonesia, investing 1.3 trillion won. Once completed, the plant will produce nickel-cobalt-manganese-and-aluminium (NCMA) batteries with a capacity of 10 gigawtt hours (GWh) every year. (NCMA batteries use less cobalt by adding aluminum and are chemically more stable than nickel-cobalt-and-manganese (NCM) batteries.) The company plans to increase production up to 30 GWhs in the future.

Among the various materials used to make batteries, the importance of nickel may rise.

“Nickel prices are going to become more important due to a rise in demand for high-nickel batteries, which have a nickel content of 80 percent,” said Jeon Chang-hyun, an analyst at IBK Securities.

Foreign companies are also competing in the race to acquire battery materials.

As demand for battery materials rise, many local companies are focusing on battery recycling, with which they can extract key materials.

Hyundai Motor Group has been cooperating with SK Innovation since September last year to recycle batteries to extract metals such as lithium, nickel and cobalt. As of June, SK Innovation had 54 patents for technologies to extract Lithium hydroxide from lithium in used batteries. Ultium Cells, a joint venture with LG Energy Solution and General Motors, signed an agreement with Canada’s battery recycling company Li-Cycle to recycle used batteries.