A recent spike in energy prices is dividing the fortunes of Korean refiners and petrochemical companies.

On Friday, it rose 1.39 percent as of press time from the previous day to $79.39, up 33.2 percent over the $59.6 per barrel price six months ago.
`
Refineries can increase prices for products made from crude oil inventories bought at cheaper prices.

An ongoing economic recovery around the world is also lifting refining margins since improved economic prospects trigger a rise in demand for petrochemical products.

Petrochemical companies are facing the flip side of the situation. Those companies typically produce plastic from naphtha, which is made from oil, and propane, which is extracted from liquefied petroleum gas (LPG). 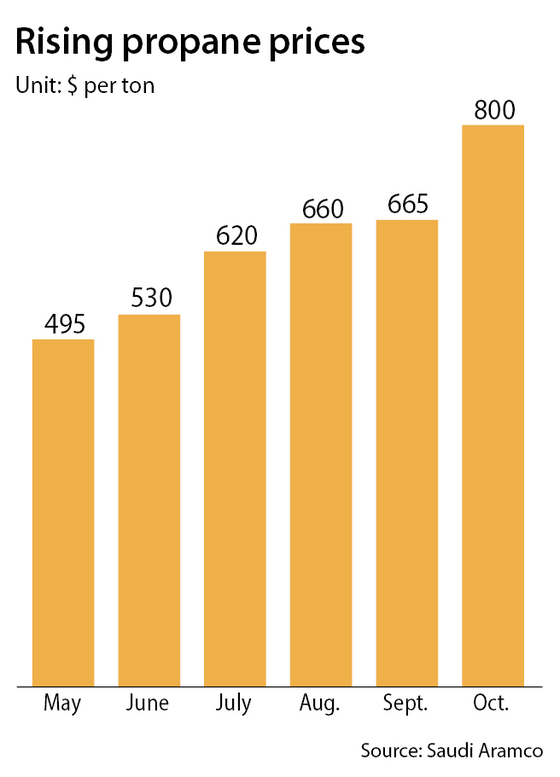 But as prices of LPG have increasingly moved in line with those of oil, the strategy is losing effectiveness.

Naphtha-based plastic accounts for 70 percent and propane-based plastics for 20 percent.
“We acknowledge that LPG prices are somewhat aligned to oil prices,” said a source in the industry, “Still, the recent hike is abnormal. We’ve expanded facilities to produce plastic using LPG to better adapt to uncertainties, but now we are in trouble.”

Importers of LPG are also in a tough situation because they failed to take into account the recent rise of LPG.

Major importers like SK Gas and E1 froze this month’s supply price of LPG gases like propane and butane.

Domestic LPG prices are set by suppliers based on changes in currency exchange rates and freight rates, but the government sometimes nudge the suppliers into setting prices in a certain direction, according to multiple industry sources.

The price for propane was set at $495 per ton in May, which increased to $665 last month. Korean supplier E1 increased the propane price per 1 kilogram to 1,144.8 won ($0.96) in October from June’s 996.8 won.
“The government called an emergency meeting in August to request that local LPG suppliers limit price increases,” another source in the LPG industry said, “We need to reflect the rise of international LPG prices, but we only see growing losses.”

The problem will get worse next month after Saudi Aramco increased the contract price of propane to $800 per ton this month.
If suppliers are to properly reflect the increase, the domestic price will likely jump by 150 won per kilogram.

The hike could directly translate into higher costs for consumers, especially in the winter season when LGP gas is in demand for heating.
“LPG gases experience higher demand in winter, but with the current price level, it will only incur greater losses for local importers,” an industry source said.