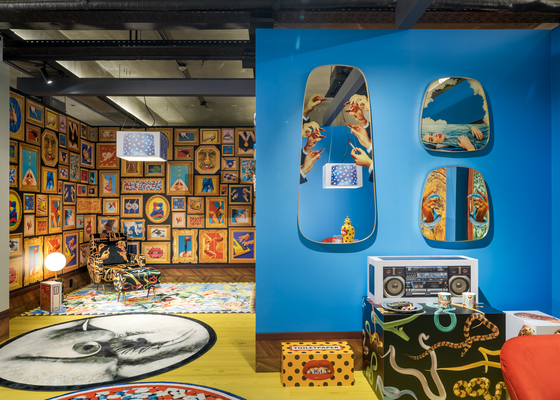 Although Toiletpaper magazine is not well-known in Korea, people will probably have seen the mirrors patterned with hands holding lipsticks on social media accounts of celebrities like Rosé of Blackpink. [STORAGE BY HYUNDAI CARD]


No one really overthinks toilet paper, and art should be dealt with in the same way, according to magazine and creative studio Toiletpaper founders Maurizio Cattelan and Pierpaolo Ferrari.

Stepping into the recreated version of the Milan headquarters of the photography-based magazine is like getting lost in Wonderland, as it is almost impossible to figure out what this place is about. 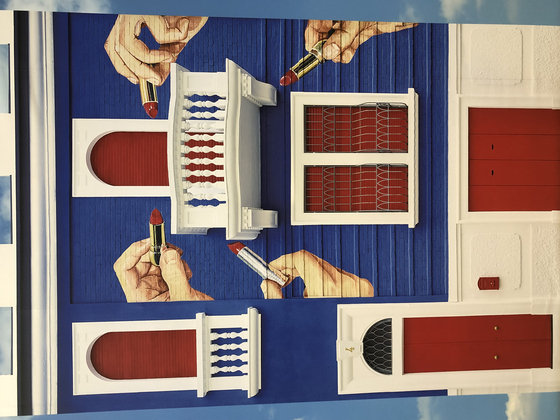 
Titled “Toiletpaper: The Studio,” the exhibition opened its doors on Friday at Storage by Hyundai Card at Hannam-dong of Yongsan District, central Seoul. It attempts to bring the inside of the original red, white and blue two-story building painted with four hands holding tubes of red lipstick exactly the way it is to Seoul, for the very first time.

The exhibition represents what Toiletpaper magazine stands for: art that is spontaneous, exotic and easygoing. Though the publication is dubbed a magazine, when flipping through the pages, one will realize that it is filled with only bizarre, yet vivid aesthetics of the most random things imaginable, like colorful snakes, a bird picking at human teeth, a frog hamburger, a mouth holding an eyeball and even big red lips with the word “shit” written in blue across the teeth. These images are portrayed as patterns on interior items including mirrors, armchairs, rugs and even vases, “as a way to amplify the influence of the publication and also [...] to spread its image to as wide an audience as possible,” Hyundai Card explained.

Even if one tries to find meaning among these seemingly delusional art pieces, there just simply isn’t one, a docent at Storage told the Korea JoongAng Daily on Thursday.

The name Toiletpaper does not have a significant meaning either. Cattelan was in the bathroom when he was thinking of a name for the magazine, and impulsively decided on “toilet paper.” The fact that there is no text or any advertisements inside the magazine also indicates how it does not try to give any significant meaning to its photographs, only relying on the imagination of its readers. 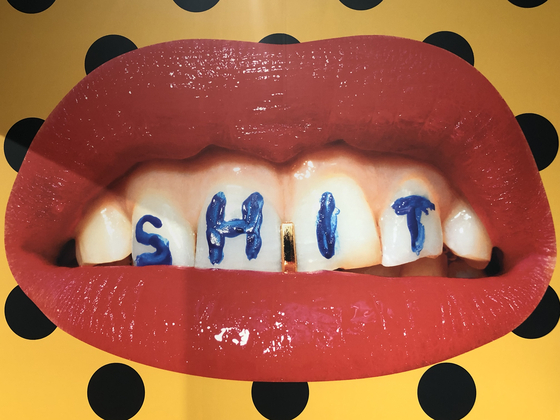 One of Toiletpaper's most famous designs, red lips with ″shit″ written on its teeth, is portrayed on many different items as well. [SHIN MIN-HEE]

Instead, each new edition of the biannual publication starts out by setting a general theme, such as “food,” “love” or “death,” which is subsequently developed into eccentric, peculiar photographs.


“We always start with a basic, general topic, such as love or desire,” Cattelan was quoted as saying by Hyundai Card. “Then, like a painter on a canvas, moving around and experimenting, we find ourselves reaching an unexpected point. The best images are the result of this improvisation.”

The first thing visitors will encounter upon entering the exhibition is a black room with wallpaper that features multicolored snakes, expressing the magazine’s love for the slithering creatures, as they are also depicted on many other items as well. 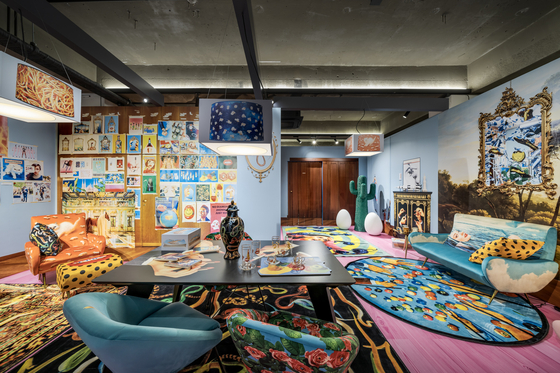 The replica of the Toiletpaper studio in Milan is shown exactly the same way at Storage. [STORAGE BY HYUNDAI CARD]


The next room creates confusion as to where to fix one’s eyes, which is the exact copy of the Toiletpaper studio in Milan, providing freedom and a source for inspiration. The walls are covered in what seem to be hundreds of different posters, and a desk with two computer screens placed in a corner, showing CCTV footage of the Milan headquarters with people dancing. Armchairs, sofas and tables with the aforementioned silly designs are arranged like they would typically be in a home, except the patterns make them all stand out individually in the strongest way possible.

There is also a washing machine in a separate room, with clothes hung on a clothesline. Clothes are scattered across the floor, creating a messy appearance. Although this is supposed to be a work space, people are free to do whatever they want to, with no restrictions or boundaries between a working environment and private space, the docent said. 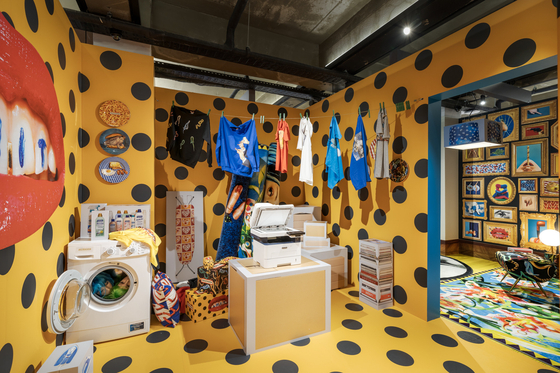 There is also a washing machine in a separate room, with clothes hung on a clothesline. Clothes are scattered across the floor, creating a messy appearance. [STORAGE BY HYUNDAI CARD]


Halfway through the exhibition, visitors will start to wonder who is getting a ton of messages on their iPhone, or if there is an incredibly loud toilet flushing somewhere inside the exhibition.

“The creators of the exhibition wanted to make it more realistic, so they got the idea of adding actual sounds from the artists’ everyday lives at the headquarters,” said the docent. “So they recorded themselves first thing after getting up in the morning, on the way to work, and while working at the office, and the sounds are being played here like background music. I guess you could say the flushing toilet marks the beginning of a new day.” 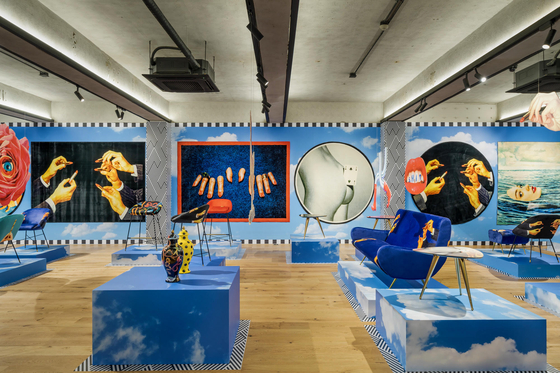 Proceed to the third floor of the basement and get a glance at the entire collection of Toiletpaper goods. [STORAGE BY HYUNDAI CARD]


While the replica of the Toiletpaper studio is on the second basement floor, the exhibition continues down to the third floor, where it shows the entire collection of Toiletpaper goods. From sofas, rugs, plates to fake tombstones by interior design brand Gufram which reads “The End,” the exhibit ends with a display of Toiletpaper’s crazy designs.

Tickets range from 4,000 won ($3.30) to 5,000 won, with a 20 percent discount available when bought with a Hyundai credit or debit card. Tickets must be purchased in advance on Hyundai Card’s “DIVE” mobile app or Melon Ticket (ticket.melon.com). “Toiletpaper: The Studio” continues until Feb. 6.