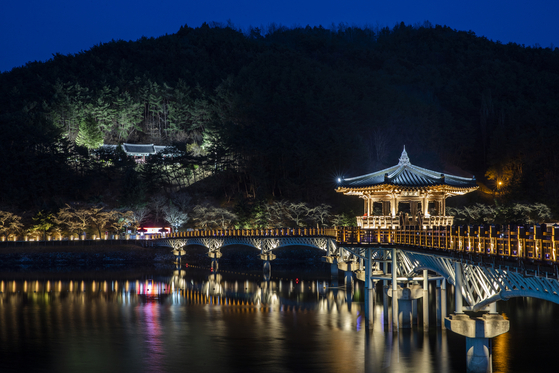 Lights alongside Woryeong Bridge in Andong, North Gyeongsang, attract visitors looking for things to do after the sun sets. [KOREA TOURISM ORGANIZATION]


ANDONG, North Gyeongsang — If you enjoy folklore handed down from generation to generation, take a trip trip to Andong. When you're thinking about who to invite along with you, keep in mind the legend that if you hold hands of the people you love and cross the Woryeong Bridge over the waters of the Andong Reservoir together, the love will last forever.

This myth can be traced to the heartbreaking love story of a woman whose letter was found in 1998 in the grave of scholar Lee Eung-tae (1555-1586) in Andong, when it was being moved to a new location. The love letter was written by Lee’s wife, as she was pregnant with a baby named Won, grieving over her husband’s death from illness. She says she can’t live without him and all she can think about is being with him, and asks him what she should do with her heart while raising their child. She asks him to come visit her in her dreams and tell her what to do. She continues to share her strong belief that she can reunite with her husband in her dreams as she has so many things she wants to tell him. The letter in Korean is shown by the river.

Since Lee’s grave was located not too far away from the area, the city decided to create the bridge in 2003 where the love story from the Joseon Dynasty (1392-1910) can be shared. The bridge is made from wood and measures 387 meters (1,270 feet) long, making it the longest wooden bridge in Korea.

The bridge is good to visit under any weather conditions and even after the sunset. Of course sunny skies offer the best view of the riverside trail with trees and the reservoir water, but gloomy weather also offers its own charm. If you visit on a rainy day, the fog embraces the edges of the bridge to make the entire scene very dreamlike. It makes you think about the dream Lee’s wife was anxiously waiting for. 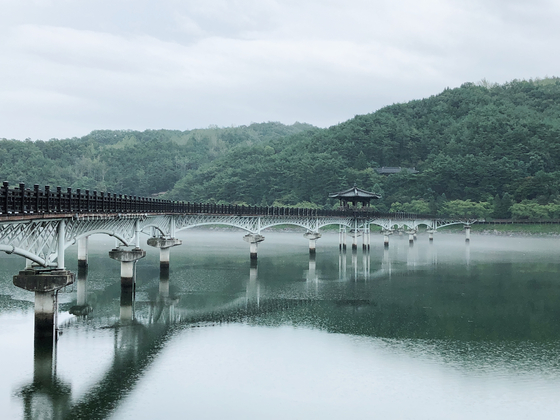 The fog embraces the edges of the Woryeong Bridge to make the entire scene very dreamlike.


The scene gets even better after dark. The bridge is adorned with lights and makes anyone crossing inspired to take out their phone to take photos. Some more lights set up by the riverside trail under the trees also make a great backdrop to capture the night scene. In the middle, there is a pavilion where you can sit down and enjoy the view comfortably.

If you just walk straight across the bridge, it doesn’t take more than five minutes. But if you also want to walk the trail by the river, spare about an hour. Since the downtown area where many restaurants are located is about a 10-minute drive, it is advised to visit the bridge after dinner and do some nighttime walk to help you digest.

To make the scene around the bridge a bit more vibrant, there are some floating boats shaped like crescent moon on the water. Called Moon Boats, up to three people can get on for 30 minutes to appreciate the nightscape for a different vantage point. It costs 28,000 won ($23) to rent a boat. You can connect your smartphone through Bluetooth to listen to your own choice of music as you float around.

For now, the bridge is all about tranquility, but the city is gearing up to present something more exciting for nighttime visitors. Called Wolhaguiseonggok, the 20-minute-long program takes visitors on a journey to find a young man who’s been lost in a village that’s been infected with a virus that turns people into zombies. The program is being held at Andong folk village located steps away from Woryeong Bridge, with actors waiting inside to make the search feel real. The city had the first run of the program, which costs 10,000 won per person, in early October and is considering making it a regular offering sometime next year. The screams coming from the village definitely catch the attention of passersby and lead them to the check-in booth of the program to inquire more.

“We will continue to promote what’s available to do even after dark so that travelers looking for something fun to do after sunset will choose to visit Andong,” said Director Lee Kwang-soo of the Korea Tourism Organization’s Daegu and Gyeongsangbuk-do Office.

One of the city’s most valuable travel destinations, Hahoe Village, is also aiming to attract returning visitors. The village where descendants of families surnamed Ryu still live is recognized globally thanks to Unesco’s inscription of it on its list of “Historic Villages of Korea” in 2010. A visit before the sundown, prior to your night-time walk around the Woryeong Bridge, will keep your afternoon busy. 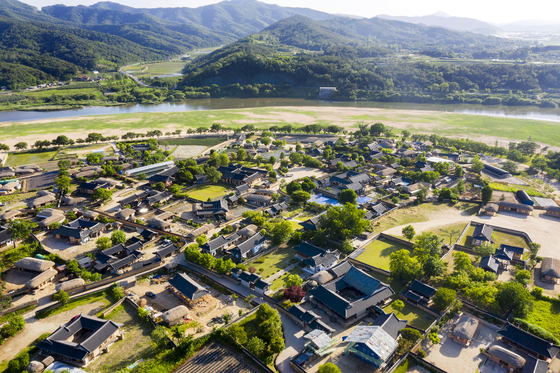 An aerial view of the Hahoe Village [JOONGANG PHOTO]


You can watch the residents of the village walk around alleys adorned with clay walls, the top of which are adorned with giwa tiles while wearing hanbok, traditional Korean garments. They will even pose for you if you want to take picture.

Byeongsan Seowon, located close to Hahoe Village, is another must-visit spot if you are interested in learning about how Joseon era scholars focused on getting a tranquil view of nature while they were studying. A visit before the sundown, prior to your night-time walk around Hahoe, will keep your afternoon busy.

To draw and paint the scenes they saw in daily life, and to get inspiration for their writing, scholars and aristocrats of the Joseon Dynasty often visited places where  mountains and rivers were located. Many of the seowon, a private school that shared Confucian teachings, were located by rivers that had mountains behind them, so scholars could easily catch a glimpse of blue and green scenery while taking breaks from their study. A total of nine seowon have been collectively designated as Unesco’s World Heritage under “Seowon, Korean Neo-Confucian Academies” in 2019. 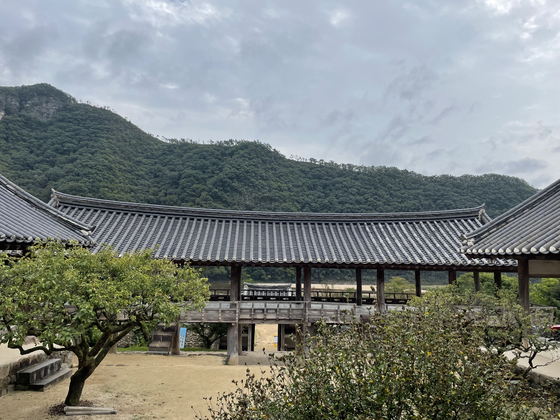 
Andong’s Byeongsan Seowon is known for its view, although it is smaller in size when compared to Andong’s other tourist hotspot Dosan Seowon, helmed by renowned scholar Yi Hwang (1501-1570) who is also well-known by his pen name Toegye. A student of Toegye, scholar Ryu Seong-ryong (1542-1607), whose pen name is Seoae and who was raised in the neighboring Hahoe Village, led classes at Byeongsan Seowon.

The seowon is particularly known for its architecture. Mandaeru, a hanok structure of two stories, shows the flowing Nakdong River from the ground floor, the mountains through the openings in between wooden pillars on the second floor and the blue sky over the roof made of giwa tiles. 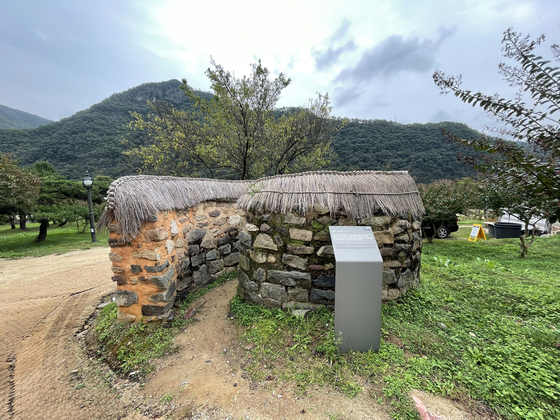 The outdoor toilet earned its nickname of a snail restroom thanks to its curves like the shell of a snail. [LEE SUN-MIN]


On your way out, make sure to check out a stone structure that’s about as tall as an average adult. It is an outdoor toilet used by people who took care of the chores at the seowon for students from aristocrat families. The outdoor toilet earned its nickname of a snail restroom thanks to its curves like the shell of a snail.

If you need more general tips on how to navigate Andong, call travel hotline 1330. The call service is available every day, 24 hours a day, in four different languages: Korean, English, Chinese and Japanese. The service offers travel information and an interpretation service. Operators who speak Russian, Vietnamese, Thai and Malay/Indonesian are available every day from 9 a.m. to 7 p.m.

'This is why rescue activities must go on'