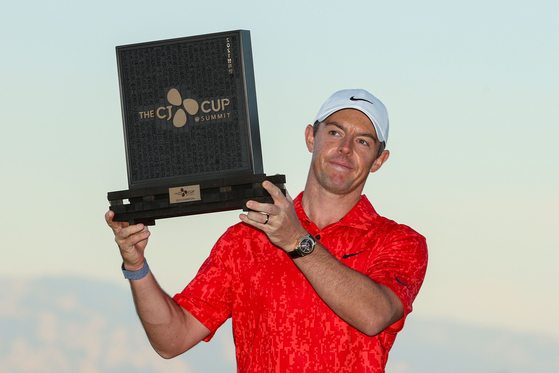 Rory McIlroy celebrates with the trophy after winning THE CJ CUP @ SUMMIT at The Summit Club in Las Vegas on Sunday. [AFP/YONHAP] 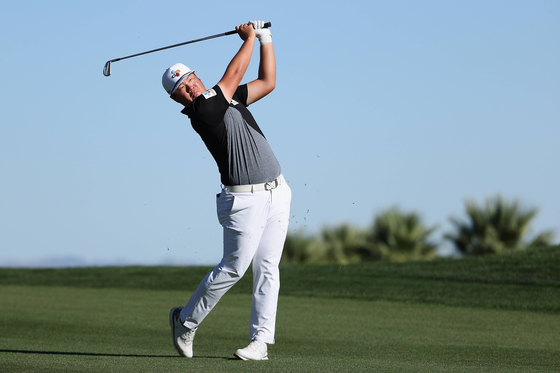 Im Sung-jae plays a second shot on the 14th hole during the second round of THE CJ CUP @ SUMMIT at The Summit Club, Las Vegas on Friday. [AFP/YONHAP]


The CJ CUP @ SUMMIT at the Summit Club in Las Vegas finished Sunday, with Rory McIlroy of Ireland taking the trophy and Im Sung-jae becoming the only Korean golfer to finish in the top 10.

Mcllory picked up his 20th PGA Tour trophy, outplaying Collin Morikawa of the United States by one stroke for a tournament-record of 25-under-par, 263. The CJ Cup was the season debut for both players and it marks the first time the Irish golfer has won on his season debut.

Im rounded off the final day with an 8-under-par, 64, carding a total of 20-under-par, 268, to finish tied for ninth position alongside four other golfers.

Instead of the PGA Tour making its way out to the Nine Bridges course on Korea's Jeju Island, the original home of the CJ Cup, the tournament was held in Las Vegas for a second year, this time at the Summit Club, allowing the event to go ahead as planned without quarantine and travel issues during the Covid-19 pandemic.

The CJ Cup is not just known for its competitive field, but also for its Korean cuisine experience event. As the official sponsor for the tournament, CJ arranged for golfers to taste its Bibigo brand of dumplings and spicy gochujang sauces on Wednesday, during the practice round.

As Korea’s lone PGA tournament, a total of 12 Korean golfers threw their hats into the ring. Lee Kyoung-hoon finished tied for 25th with a clutch 66 on the last day to card a total of 17-under-par, 271. Lee had a bogeyless final round and also pulled off an eagle on the par-5 14th.

Kim Seong-hyeon, who flew to Las Vegas after playing on the Japanese tour, carded a 69 on the last day to finish tied for 32nd with 16-under-par, 272.


“I am quite happy with the result,” said Kim Seong-hyeon. “My third and fourth rounds could have been better but I think rounded off the tournament pretty well. If I get another chance at it, I think I’ll play better.”

After a great second round with seven birdies and an eagle in the par-5 18th, he had tied for second with three other golfers, earning a place in the leader group alongside Jordan Spieth and Keith Mitchell of the United States.

“It was a good experience to play alongside Speith and Mitchell,” said Kim. “I learned a lot from watching how they play.”


Im, on the other hand, was able to comeback despite a slippery start. He double-bogied the par-5 third on the second round. Carding a 68 on the first day and a 69 on the second day, Im went in to moving day tied for 35th, but ended up as the only Korean to finish at the top-10.

“Last week’s win helped a lot,” said Im at a post-tournament interview. “I hoped that I could birdie as many as I could today and I gained confidence from the eagle chip-in in the first hole that lasted until the end, enabling me to birdie many holes.”

The PGA Tour continues with the Zozo Championship that will start on Thursday. Im will be resting due to discomfort in his wrist.