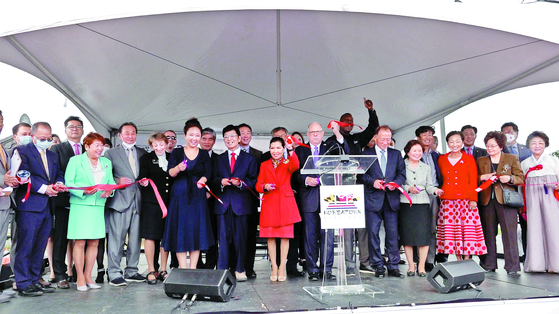 The author is the Washington bureau chief of theJoongAng Ilbo.


Route 40, stretching from the east coast to the west coast in the United State, passes through Ellicott City, Maryland. The area, with 170 Korean businesses along the road, was recently designated as a Korea Town on Hangul Day. It is one of the few cases of official designation by a state government. A structure replicating hanok, or a traditional Korean house, was installed. It is the fruit of long efforts to develop the Korean-American community.

The governor of Maryland is Larry Hogan, widely known as “Korea’s son-in-law.” Yumi Hogan, the first Korean-American first lady, served as the honorary chair of the Korea Town Committee and offered her full support. Gov. Hogan and the first lady attended the opening event.

Having been re-elected in the Democratic stronghold, Governor Hogan is considered a Republican primary runner for the 2024 presidential election. During the Capitol riot earlier this year, Hogan, an outspoken Trump critic, openly called for him to resign. When the Republican Party attempted to oust Liz Cheney, chair of the House Republican Conference and anti-Trump figure, Hogan said that after the “worst four years” under the Trump residency, the GOP has become “sort of a circular firing squad where we’re just attacking members of our own party instead of focusing on solving problems.”

Gov. Hogan told Politico that he would focus on next year’s midterm election rather than the presidential election. But he did not hide his ambition for candidacy.

The wall of reality is high and strong. While his approval rating as a governor is high at 60 to 70 percent, his rating as the next Republican presidential candidate is about 1 percent, according to an Echelon Insights poll.

The U.S. presidential election is heating up unusually early, with three years left to go. As President Biden is shaken by the chaotic withdrawal from Afghanistan, former Trump is holding a series of public rallies to bring back his supporters. Some 82 percent of Republicans find him favorable, and 67 percent support him to run for president again, according to a Morning Consult survey.

While celebrating the establishment of Korea Town, Gov. Hogan said “Thank you” in Korean. He also said that he is proud to be the son-in-law of Korea. The Korean business district that had shrunk due to the pandemic had hope and vitality.