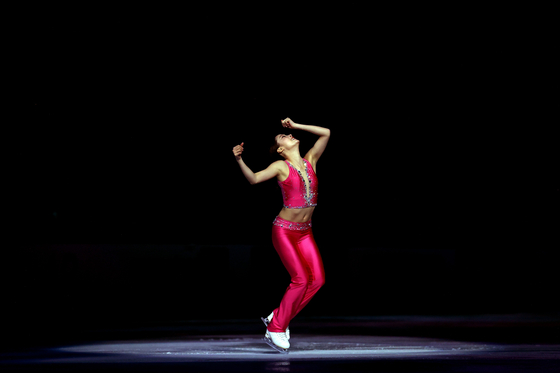 Young You performs in the Exhibition Program during the ISU Grand Prix of Figure Skating Skate America at Orleans Arena in Las Vegas on Saturday. [AFP/YONHAP]

You competed at the ISU event in Las Vegas, scoring 70.73 points for her short program on Saturday. Despite being one of the few women in the world who has a triple axel in her repertoire, she missed her landing and finished fifth. On Sunday, however, You scored a season-best 146.24 points for her free skating program for a combined 216.97 points, performing to Alain Albert Boubill’s “Les Miserables” soundtrack.

This put You in second place for just her free skating program and in third place combined, behind Alexandra Trusova of Russia with 232.37 points, some 15 points ahead of second place compatriot Daria Usacheva.

Fellow Korean skater Kim Ye-rim finished in eighth place with 70.56 points in the short program and 128.78 points in the free skating program for a total of 199.34 points.