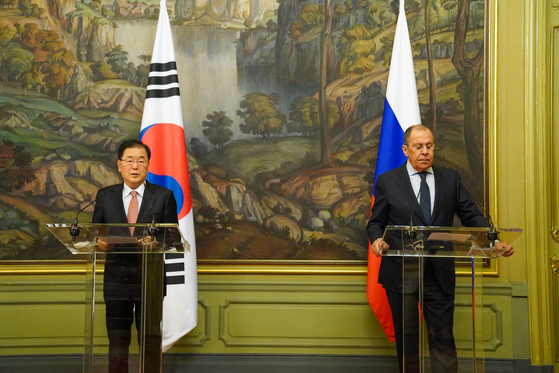 Foreign Minister Chung Eui-yong and his Russian counterpart Sergei Lavrov emphasized dialogue and diplomacy with North Korea during a meeting in Moscow Wednesday.

“We emphasized the need to resume negotiations amongst all relevant countries to find a long-term and collaborative resolution for peace on the Korean Peninsula,” said Lavrov in a joint press briefing following the meeting in Moscow.

Chung thanked Russia for its “consistent support for the improvement of inter-Korean relations” and requested that Russia “continue to play a constructive role” in the complete denuclearization and establishment of lasting peace on the Korean Peninsula.

While he did not mention a declaration to end the 1950-53 Korean War, which is being pushed by the Moon Jae-in administration to bring North Korea to the negotiating table, Chung emphasized that he and Lavrov discussed various measures to engage North Korea with dialogue and diplomacy.

The two met for the first time when Lavrov visited Seoul in March. Their meeting in Moscow marked the first time in 14 years that foreign ministers of Russia and Korea visited each other in the same year, according to the Foreign Ministry.

During his visit to Moscow, Chung also attended the closing ceremony of the “Year of Cultural Exchanges” between Russia and Korea, which designated the years 2020 and 2021 as special years to commemorate their 30th anniversary of diplomatic ties. Altogether 225 cultural events dedicated to bilateral ties were hosted in these years, according to the Foreign Ministry.

The two ministers also discussed a state visit by Russian President Vladimir Putin to Korea. The last meeting between the countries' leaders took place in 2019 when Moon and Putin met on the sidelines of a G20 summit in Osaka, Japan.

“We intend to organize together the state visit by President Putin as soon as the Covid-19 situation stabilizes,” Chung said.

Chung also emphasized that negotiations on a Korea-Russia free trade agreement are “speedily progressing” and that the FTA, once in place, would provide an institutional foundation for the two countries’ economic activities and cooperation in the fields of health and medical care, the Arctic region and hydrogen energy.

“Despite the Covid-19 pandemic, our bilateral trade in the third quarter rose by 47 percent compared to the third quarter of 2020,” Chung said. “It is a testament to the complementary nature of our economic cooperation, and we intend to continue to work together especially in the fields of infrastructure, shipbuilding, health and more.”

Korea won some 11.2 trillion won ($9.58 billion) worth of shipbuilding contracts with Russia since 2017, including ice-breaking LNG carriers, according to the Foreign Ministry.