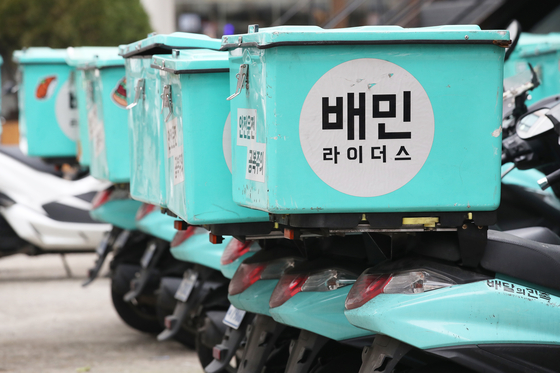 
Food delivery companies are implementing speedier one-order-per-delivery systems, but the convenience comes at a price.

An emergency meeting was recently convened at Woowa Brothers, the company that operates food delivery application Baedal Minjok. It’s not that less deliveries are made on the application. According to market trackers Wise App, Wise Retail and Wise Goods, transactions on Baedal Minjok totaled 13.9 trillion won ($11.9 billion) during the Jan-Sept period, up 90 percent on year.

Orders made on the Baedal MInjok application in August surpassed 100 million for the first time, according to the company.

More people are ordering, but the problem of delivery fees remains unsolved.

Woowa Brothers in June introduced the Baemin One system, limiting riders to carrying one order at a time. Delivery riders receive a higher fee of some 6,000 won per order under the system. Previously, one delivery worker was assigned multiple orders — usually five at a time — and delivered them all at once for a fee between 3,000 to 4,000 won per order.

One rider delivering one order means customers spend less time waiting for their food, and many have been using the system. About 30 percent of orders on Baedal Minjok are made via the one-order-per-driver system.

The company initially announced it will receive a brokerage fee of 12 percent and a delivery fee of 6,000 won per order — a cost the restaurant and customers pay together, which is then given to the rider. However, Woowa Brothers has been holding an open-ended promotion that levies a cheaper brokerage free of 1,000 won per order and a 5,000-won delivery fee.

The promotion lowers the delivery fee restaurants and customers need to pay, attracting more users to the app. But Baemin One riders need to be given 6,000 won per delivery regardless of the promotion, and the 1,000-won difference is paid by Woowa Brothers.

Coupang Eats was earlier to the trend, first starting the one-order-per-delivery system in 2019. The application announced it will receive a brokerage fee of 15 percent and a delivery fee of 6,000 won, but has also been offering a promotion. It’s brokerage and delivery fees are the same level as Baedal Minjok’s. The promotion was intended to last three months, but is still being continued today.

Although companies are having a hard time coping with excessive promotions, they have no choice but to continue if they want to win over customers.

Coupang Eats has been financing itself with the help of Coupang Inc., its parent company in the United States. The U.S. company issued shares three times this year — in April, July and October — to finance Korea’s Coupang with over 910 billion won.

“Coupang and Baemin are both worried that they’ll lose competitiveness the minute they fail to take the lead in the new single-delivery market, like what happened in the United States,” said an official working for a food delivery company. “Both companies will be frustrated from increasing losses, but it will be hard for them to stop the promotions that are hurting them.”

San Francisco-based DoorDash became the leading player in the United States with a food delivery market share of 55 percent in 2021 after it implemented Own Delivery, a one-order-per-delivery system. Uber Eats follows with a market share of 22 percent.

Some expressed concerns for the future of the industry.

“Restaurants are angry about high fees, but the companies operating food delivery applications are also suffering from losses,” said Koo Tae-eon, a lawyer at law firm LIN. “This means that the market isn’t healthy.”