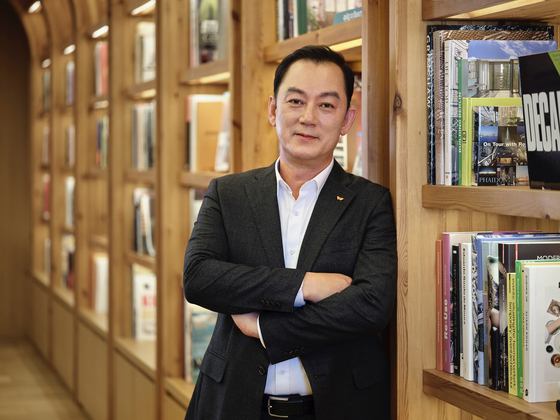 
The oil exploration and production (E&P) business is considered one of the main contributors to global carbon emissions.

The industry accounts for 9 percent of all human-made greenhouse gas emissions, according to a McKinsey report last year.

Nonetheless, oil and gas are inseparable parts of modern human lives, at least until a breakthrough energy that is eco-friendly is developed and commercialized.

Before that happens, reducing carbon emissions remains a challenging task for oil and gas E&P companies.

SK Earthon, an oil E&P subsidiary of SK Innovation that was split off on Oct. 1, wishes to play a leading role in this area.

As the latest edition of a company that started the E&P business in 1982, SK Earthon believes that its experience and accumulated data in the area can help achieve a more sustainable business.


“The E&P business holds a huge challenge in relation to carbon emissions,” said Myeong Seong, CEO of SK Earthon, in an interview posted on the company website recently.

Myeong, who joined SK Innovation in 1995, has been involved in various E&P projects and started leading the team early this year. He was appointed CEO of SK Earthon when it was split off.

“However, before energy that can replace oil and gas is developed and the related infrastructure prepared, the human race needs oil and gas,” he said.

SK Earthon is taking a two-track strategy in its green initiative.

It wishes to fortify its existing business in E&P. On the back of its E&P projects in China and Vietnam, SK Earthon wishes to expand to Southeast Asia.

“On top of that, the company plans to come up with eco-friendlier facilities that minimize the emission of carbon dioxide in the oil E&P business. We want to become a ‘CO2 free operator’ in this area.”


The company wants to fortify carbon capture and storage (CCS) technology to boost its green initiative. Through CCS technology, emitted carbon from various business activities can be stored underground and be used for other purposes later on.

“SK Earthon plans to speed up ‘green transformation’ on the back of CCS technology by preemptively testing it and making it into a tangible business,” the CEO said.

“We are going to expand underground storage for carbon dioxide in Southeast Asia and establish a practical net-zero platform.”


As part of its initiative, SK Earthon since May has been participating in a state project exploring underground storage locations for emitted carbon dioxide in the Yellow Sea. SK Earthon was the only private company that took part in the project.

Utilizing the Yellow Sea gas field operated by the Korea National Oil Corporation, SK Earthon plans to store carbon dioxide generated from a nearby chemical complex located in Ulsan. It wants to take the project further to the East Sea for more excavation in underground storage.

“SK Earthon will sort out potential locations for the storage and explore the underground structure. After that, we will simulate and analyze how much storage is possible,” Myeong said.


In order to carry out the job efficiently, lowering risk and uncertainty through digitization is essential, according to Myeong.

“Handling massive amounts of data related to geography, geophysics and oil engineering needs a lot of analysis as well as time,” Myeong said. “That is why digitization of the E&P business through big data and machine learning is prerequisite.”


SK Earthon has been collecting and saving data related to its core business since 2018, he said. As a result, the company has earned three patents related to its business in United States, China and Korea.

“In the mid-to-long term strategy, digitization will extend to CCS technology as well,” the CEO said.