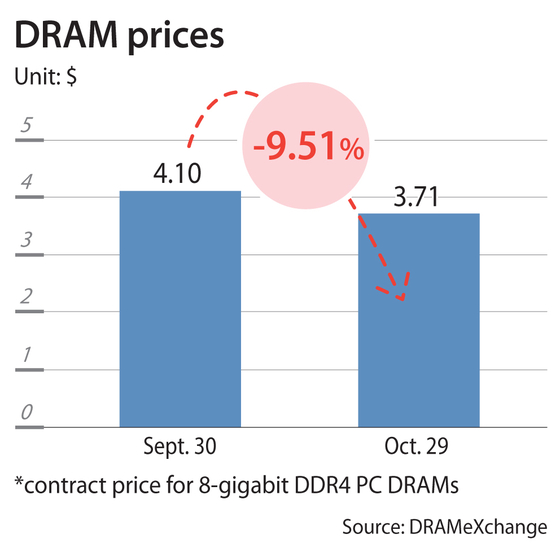 According to Taiwan’s market tracker TrendForce, the average contract price of 8-gigabit DDR4 PC DRAMs was $3.71 on Oct. 29, down 9.51 percent from Sept. 30. That’s the biggest on-month drop since June 2019 and the first time prices fell on-month since October last year.

Many expected contract prices to fall, since the leading indicator of spot prices fell earlier. It takes about two to three months for spot prices to be reflected in contract prices. Based on chip price tracker DRAMeXchange, the spot price of PC DRAMs in August was down 36 percent from this year’s peak of $5.3 in March.

Morgan Stanley in August released a report titled “Memory — Winter is Coming,” saying that DRAM prices will fall as demand for computers, smartphones and servers decreases. It cut the target price for local chip maker SK hynix from 156,000 won ($132) to 80,000 won and for Samsung Electronics from 98,000 won to 89,000 won.

With countries returning to normal expected to pull down demand for computers, DRAM prices have peaked earlier than expected.

SK hynix said during its third quarter conference call on Oct. 26 that it had “prolonged chip price negotiations due to some customers planning to sell down their inventory.”

“DRAM prices will significantly fall through second quarter next year,” said Meritz Securities analyst Kim Sun-woo. “However, the drop will ease in the second quarter compared to the first, and show signs of improvement.”

Companies are depending on inventory management and production efficiency to counter dropping prices.

“The situation isn’t as serious because price fluctuations of memory chips are weaker and shorter than the past, and [we] carry lean inventory levels,” said Han Jin-man, executive vice president of the memory business of Samsung Electronics.

The company said its inventory has enough room for a build-up without being forced to sell at the current low price. Price competitiveness will be enhanced by using extreme ultraviolet (EUV) lithography processing to make chips, a technology the company says is used to cut production time.

Analyst Kim added that Samsung Electronics remained relatively quiet about its annual investment plan unlike its other third quarter conference calls, which is an uncertainty for the company.

“There are concerns that the company could make investments in memory chips during the fourth quarter, which could put a strain on its business if made when demand is falling,” said Kim.