Karrot gets easier mode of payment on Jeju

Karrot gets easier mode of payment on Jeju 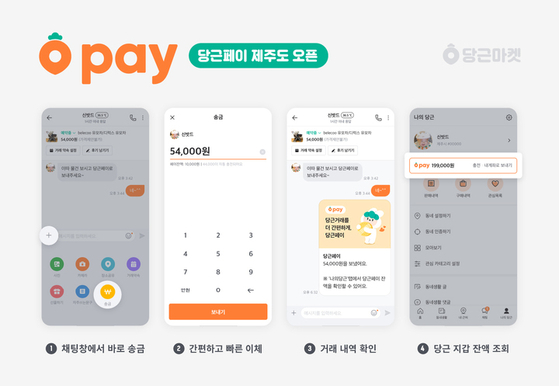 Screen grabs showing how users can send money to others via Danggeun Pay. [DANGGEUN MARKET]


Danggeun Market started its own payment service on secondhand marketplace application Karrot for use on Jeju Island, with plans to offer the service nationwide.

Users of Karrot previously had to use bank transfers or even pay in cash by meeting face-to-face.

Customers on Jeju will now be able to complete transactions with Danggeun Pay. They will first have to transfer money to their Danggeun Wallet. Then they will see a "Transfer" button in the application's chatroom.

Jeju residents will have to update the Karrot app.

The company said it chose Jeju for a trial service because transactions are among people living and working in the same area. Some 95 percent of Jeju residents between the ages of 20 and 64 use Dangguen Market, according to the company.

Danggeun Market said it plans to expand the payment service nationwide by the end of this year.

When the service is available nationwide, users will be able to pay using Danggeun Pay when buying from stores listed in the “Nearby” section of the app. Stores such as restaurants and discount marts within a proximity of the user are listed in the Nearby section.

“Danggeun Pay will not only enhance the convenience of the users, but become a service that helps to actively connect locals,” said Danggeun Market CEO Gary Kim.