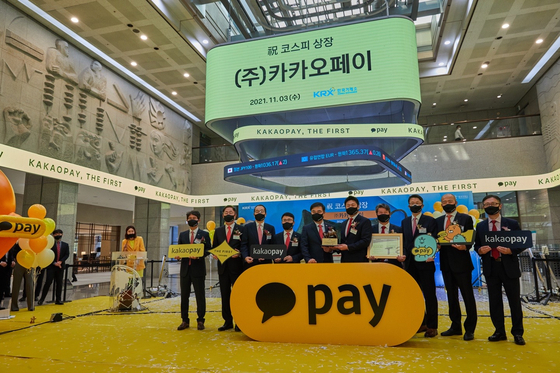 Kakao Pay CEO Ryu Young-joon, fifth from right, and officials from the Korea Exchange and underwriters for the Kakao Pay initial public offering celebrate the listing of the mobile payment company on Wednesday at the Korea Exchange in Yeouido, western Seoul. [KOREA EXCHANGE]

Based on the closing price, the market capitalization of the Kakao unit, 55-percent owned by Kakao and 45-percent owned by Alipay Singapore Holding before listing, came to 25.16 trillion won. It is currently the 13th largest Kospi stock, excluding preferred stock of Samsung Electronics. It ranked two steps below KakaoBank, which went public in August and has a market cap of 28.2 trillion won.

The company had initially planned to go public in August, but the schedule was delayed twice due to scrutiny by the government on the company's stock pricing as well as some of the businesses it was offering.

At the end of August, the company lowered its offering price band from between 63,000 won and 96,000 won to 60,000 won and 90,000 won while delaying its listing schedule to October on concerns of overvaluation of its stocks.

Then in September it fixed its securities registration statement once again as it suspended some services after the financial regulators warned they violate the Financial Consumer Protection Act that went into effect on Sept. 25. While fixing the statement, the listing schedule was delayed to November.

On Wednesday, CEO Ryu Young-joon of Kakao Pay said in a statement that it will push toward its goal of innovating finance and increase value for its shareholders.

Kakao Pay was the first Korean company to distribute shares equally to all retail investors subscribing to the IPO rather than allocating more to those willing to place larger deposits.

Brokerages estimate that retail subscribers were able to purchase an average of two to three stocks per person.