Trucks out of servie at a parking lot at a truck stop in Seoul on Thursday. The shortage of urea solution has forced such commerical trucks off the roads. [YONHAP]

The government is scrambling to find solutions to a shortage of urea, particularly because of the impact on owners of diesel trucks and cars.

Vice Finance Minister Lee Eog-weon said the government will prohibit any hoarding of urea, which is the main component of diesel exhaust fluid (DEF), a product needed for the running of diesel engines that cuts emissions.

The Vice Finance Minister said the government will take steps to prevent people from taking advantage of the supply shortage by either hoarding urea or not releasing stock.


The government agreed to set up centers at Environment Ministry branch offices where people could report any hoarding of urea products.

The government might also negotiate with the Chinese government to ease its urea export regulations.

Urea solution stockpiles have disappeared and prices have spiked.

China tightened its exports of fertilizers, including urea, the main ingredient in DEF, after fertilizer prices soared and started affecting food production.

The Chinese government also cited a recent spike in coal price as a reasons for tightening exports of urea. Urea is extracted from coal.

Korea’s relies on China for urea. According to the Korea International Trade Association (KITA), China accounted for 66.1 percent of urea imported to Korea. Indonesian supplies came in second at 13.8 percent and Qatar accounted for 10.5 percent. 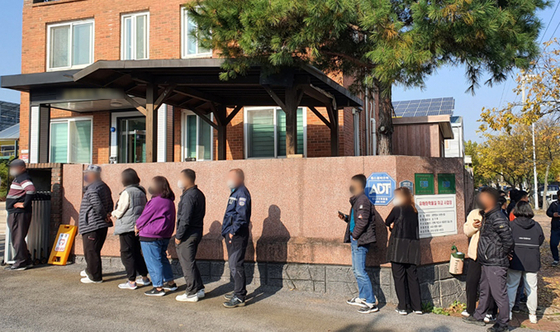 Residents of Iksan, North Jeolla, waiting in line at a manufacturing plant that was offering urea solutions on Thursday. The residents waited four hours. Urea solutions not only applies to diesel-fueled passsenger cars and trucks but also on farming machineries. [YONHAP]

Cars with the SCR system require DEF, which is injected into the exhaust stream of the vehicles and stored in a reservoir separate from the fuel tank to help convert nitrogen oxide into nitrogen and water.

Diesel vehicle owners need to fill their DEF reservoirs regularly. The absence of DEF might cause a breakdown of equipment or a failure in the engine fuel system.

The current crisis is hitting commercial trucks particularly as they consume more DEF than cars.

Commercial vehicles including cargo trucks needs to fill up DEF every 300 to 400 kilometers whereas diesel passenger cars only need to fill up every 10,000 kilometers.

Among 3.3 million diesel-powered cargo trucks, 2 million are estimated to use DEF for their emission reduction systems. Some 2 million passenger cars are dependent on it.

Some cargo trucks have been taken off the road for a week as owners try to find DEF.

With cargo trucks affected, the DEF shortage could even hurt Korea’s exports, which have recently been breaking records.

A study by Hyundai Research Institute estimated an economic loss of 112 billion won a day in 2012 when cargo distribution dropped 20 percent due to a truck driver strike.