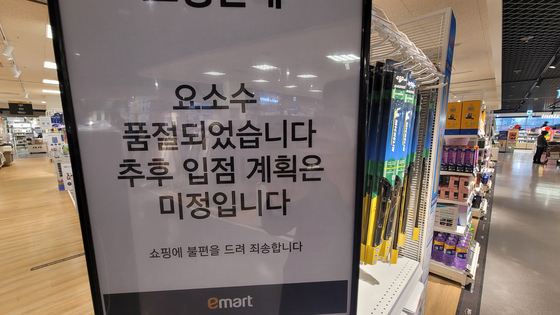 A notice at a discount supermarket in Daejeon on Wednesday says that diesel exhaust fluid (DEF) is sold out. [YONHAP]


Government announced Wednesday that it has nearly three-months of urea supplies needed to run Korea's diesel vehicles, including urea coming from China and Vietnam as well as supplies currently held by Korean companies.

Urea makes up roughly 30 percent of diesel exhaust fluid (DEF), which is needed for diesel cars and trucks to run. Korea's DEF shortage has threatened its supply chain network, which involves hundreds of thousands of diesel trucks.

The Ministry of Foreign Affairs said in a statement Wednesday that it has "found progress in the exports of 18,700 tons of urea after communicating with the Chinese authorities via various channels."

The 18,700 tons of urea had been stuck in Chinese customs. When it arrives, 10,300 tons will be used for vehicles, according to the ministry.

Separate from the 18,700 tons, 2,700 tons of urea for industrial purposes were shipped from a Chinese port Wednesday morning. Urea is also used in manufacturing and farming.

The government said it found more urea supplies in Vietnam in a separate statement released Wednesday.

A local company not named by government secured 5,000 tons of urea from a Vietnamese company and the supplies will likely arrive in Korea in December. Whether that urea can be used to make DEF for vehicles is yet to be confirmed. If it can't, it will be made into fluids for industrial use. Fluids for cars need to be purer than those used in industrial processes.

The government also confirmed that 27,000 liters of DEF from Australia will be delivered to Korea via military cargo aircraft Thursday. The Australian supplies will mostly be used for ambulances.

The government said it confirmed inventories of 15.61 million liters of DEF for vehicles and 7.49 million liters of DEF for industrial purposes from 299 local companies as of Wednesday. The National Tax Service and a team lead by the Ministry of Environment conducted the research. The government said in a statement that it "believes there will be more stocks held by small retailers and gas stations."

Some 200,000 liters of DEF reserved by the military will be supplied to 32 gas stations near the country's five major ports in Busan, Incheon, Gwangyang, Pyeongtaek and Ulsan from Nov. 11 for container cargo trucks. These trucks play a crucial role in the supply chain in Korea.

The government said it will limit maximum supplies of DEF per truck to 30 liters and charge 1,200 won ($1) per liter, which is similar to the DEF market price before the supply crunch. Some 7,000 trucks among roughly 10,000 container trucks are expected to get DEF supplies.

"We have about two and a half months of supplies of DEF for vehicles," the government said in a joint ministry statement. "Considering there are local stocks that the government has not yet identified, it's safe to say we have about three months supplies."

The supply crunch began when China last month tightened exports of fertilizers, including coal-extracted urea, as it tries to handle a coal and power supply shortage.

According to data from the Korea International Trade Association early this month, Korea relied on China for 80 percent of its urea imports this year through August. Last year, China accounted for 66 percent of urea imported to Korea.