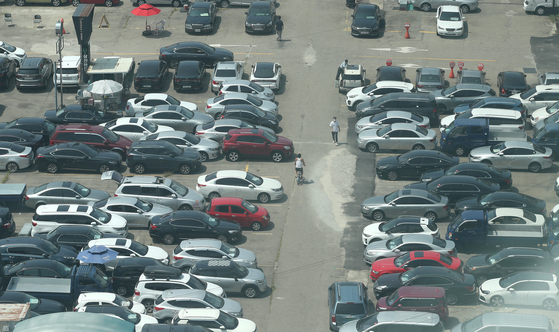 Korea’s used car market needs to be opened up to big companies and even automakers, according to a conference held Monday.

“Advanced countries all allow automakers to take part in the secondhand car market and this is a way to enhance the benefits to consumers, increase business opportunities for secondhand car sellers, enhance competitiveness of automakers as well as the parts maker,” said Jung Man-ki, chairman of the Korea Automobile Manufacturers Association (KAMA) on Monday.

KAMA and eight other auto-related associations held a conference Monday to discuss about the state of Korea’s used car market.

Big companies were banned from the used car market in Korea in 2013, when the industry was protected for small and midsized companies. SK Group sold off its used car business.

For many years, the industry has been plagued by various scams in which dealers rip off people through false ads and concealing defects in cars being sold.

In 2019, the Korea Commission for Corporate Partnership asked the Ministry of SMEs and Startups to allow big companies in the industry, but no decision has been made.

“The number of consultations on used car transactions ranked No. 1 at the Fair Trade Commission’s consumer consultation center out of all products that cost more than 10 million won,” said Kwak Eun-kyoung, secretary general of Consumerwatch, a non-governmental consumer organization based in Seoul.

“Consumers are either scammed by a dealer or they try to directly purchase a used car from an owner to avoid scams. The situation is serious for consumers in terms of both intangible and tangible damages they can suffer.”

After-sales service is another problem in the purchasing of a used car.

“Current dealers offer very unreasonable conditions such as providing after-sale service only within one month of a purchase.”

Continued over-regulation of the industry will only make it worse.

“If the exiting problems are fixed, the used car market can grow into an industry that is worth 50 trillion won, which is nearly double its current 30 trillion won,” Kim Pil-soo, an automotive engineering professor at Daelim University said.

“It will not only develop the market, but also generate a separate after-sales market and increase employment. No other advanced country currently regulates automakers from entering the secondhand car market.”

The Ministry of SMEs and Startups is expected to resume discussion on the issue this year.

Hyundai Motor and Kia, two of the biggest carmakers in Korea, are gearing up to enter the market, betting that the regulation will be lifted. SsangYong Motor is also said to be mulling entering the market.