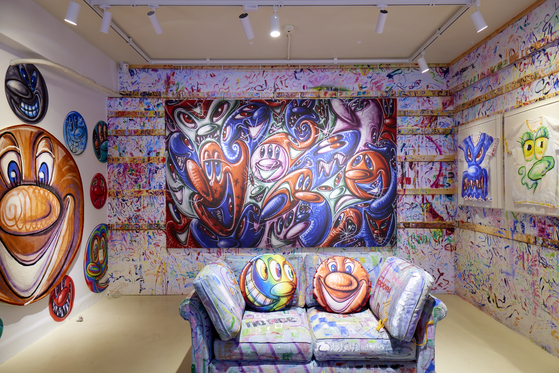 A replica of Kenny Scharf's art studio in LA features his actual sofa. The brushstrokes on the wall and sofa are no accident - Scharf really paints on them while working on his art. [BAIK ART]


Art exhibitions such as “Scharf Schak” are proving popular among younger audiences. Artists like Kenny Scharf and Mr. Doodle are currently showing off their trendy pieces at exhibitions across Seoul, offering entertainment to millennials and Generation Z, alike.

Baik Art, in Seongsu-dong, eastern Seoul, is holding a solo exhibition starting Monday, of LA-based pop artist, Kenny Scharf. Its highlight is a recreation of “Scharf Schak,” which was a pop-up store that sold merchandise like t-shirts and hoodies imprinted with Scharf’s artwork: Colorful, alien-like cartoon characters mostly with large, googly eyes and round noses.

In an online press interview from the Baik Art pop-up exhibition on Friday, Scharf was beaming with joy thanks to the shack’s return for the first time in almost thirty years since it closed in 1995.

This version is bigger and better than ever before. 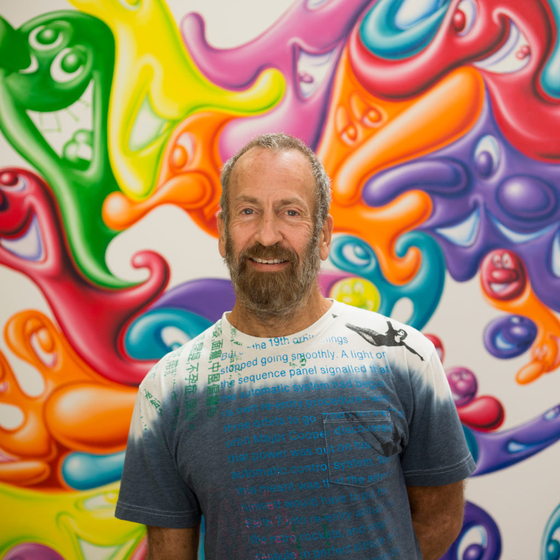 
“The original was so small, we had no space for display and we couldn’t really fit anything more than t-shirts,” Scharf said. “I’m really happy to see these new designs; I feel like I’ve come so far.”

The “schak,” a stylized alternative spelling of “shack,” was actually designed to look like like its namesake with a thatched roof.

What initially appear as humorous cartoons actually have much more to them than meets the eye.

Scharf first started the "schak" as a way to make art more accessible to the public. This is part of his philosophy; breaking away from “elitist” art “to aspire and bring good art to the everyday experience [...] it can be anytime, anywhere, even a t-shirt. I want to bring the inspiration everywhere,” Scharf said. 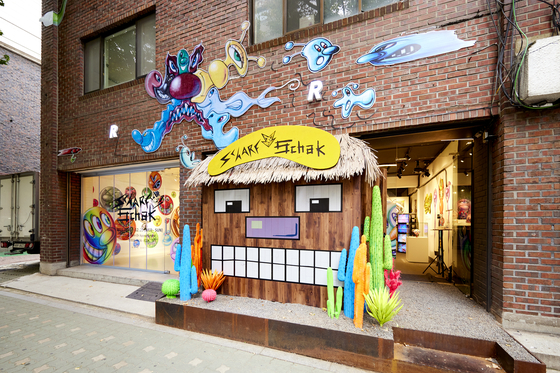 The outer view of the second version of ″Scharf Schak″ in Seongsu-dong shows the thatched roof. [BAIK ART]


Scharf is also determined to send messages of environmental awareness through his artwork. The themes can be simple like a celebration of the beauty of nature, or more profound, depicting Scharf’s own ongoing internal battle between man and nature.

“If you look at my works you see a lot of organic ones [with round and curvy shapes], mimicking flowers or fruits, things in nature,” Scharf said. “And then you’ll find hard, angular shapes [with perpendicular hard edges which] represent man and machines [that cause harm to nature].”

The inspiration behind these wacky artworks come from basically everything, especially nature. Scharf said that he wants to “physically destroy” the things that are destroying the world.

When asked how he aims to achieve that, his answer was simple: “Picking up garbage and putting it into art.” 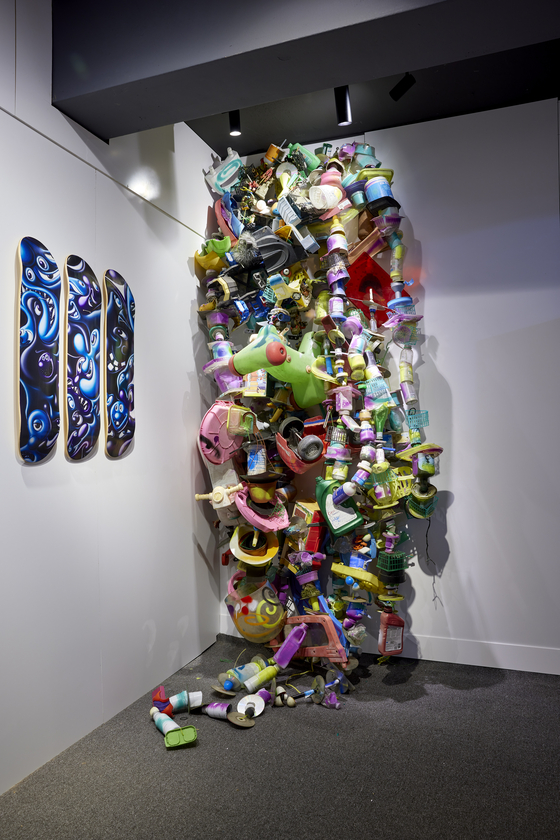 
“I do what I can in my personal life. I’m very conscious of plastic consumption. You can see there is a whole wall of plastic and most of that is either things I use myself from my own personal consumption, or things I found on the street in my daily routes going about the city.”

A replica of the aforementioned “wall of plastic” installation is on display at the new shack.

“I think art has the power to elevate the mundane, and we all need inspiration every single day,” said Scharf. “Inspiration should not be relegated to one place and one time. It should be available when we need it, when we want it, and something as simple as a t-shirt can even offer that. I’m all for it.” 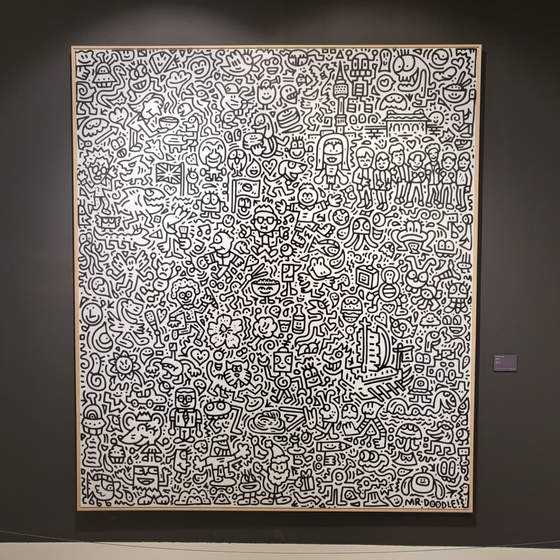 
Another exhibit earning the attention of the MZ generation is underway at the Avenuel Art Hall inside the Lotte World Tower in Jamsil, southern Seoul. The exhibit titled “Art & Desire,” features works by artists such as Mr. Doodle, who became a multimillion-dollar auction sensation with his artwork.

The exhibit introduces about 40 works by the 26-year-old British-born Mr. Doodle, whose real name is Sam Cox.

“Mr. Doodle’s works are especially popular among young Asians and he has millions of social media followers, a large portion of whom are Koreans,” said Kim Young-ae, head of Art Business Office at Lotte Department Store. The exhibit includes the large drawing “MLT Live” (2019), measuring 240 by 205 centimeters (7.8 feet). The drawing features well-known figures and landmarks like K-pop boy band BTS and Psy, as well as Namsan Tower and a Korean flag. 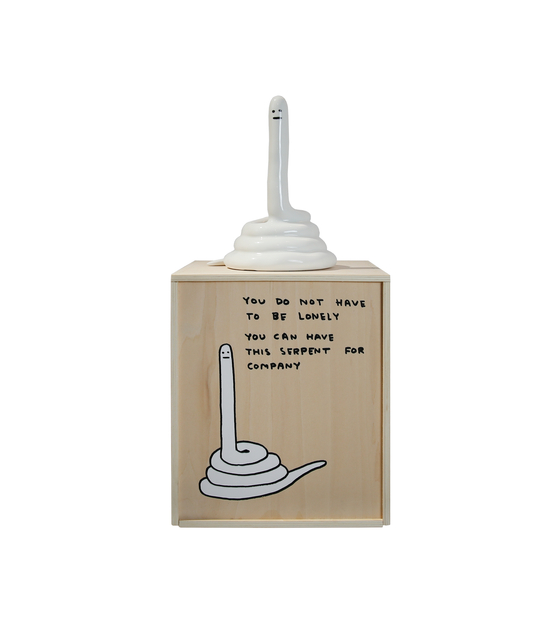 
According to Kim, this special exhibit of popular works has been organized to mark the 42nd anniversary of the department store, as well as the 100th anniversary of the birth of late founder Shin Kyuk-ho. Along with Mr. Doodle, works by 10 other artists are on display, including Tracey Emin, Felipe Pantone, Shantell Martin, Dabsmyla, Eric Haze, Faile and David Shrigley.

English artist Emin’s renowned neon sign artwork “An Insane Desire for You” (2019) is also on display. Some works are displayed not inside the exhibition hall but in a show window that is only visible to those passing by. 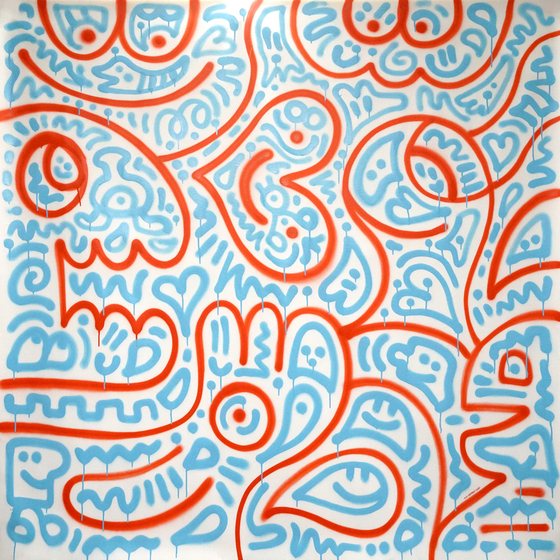 
“We wanted to attract young people who are all in about art and owning pieces as well,” said Kim. “To draw in such young art lovers visiting Lotte World Tower, we’ve decided to exhibit some attractive works in the show window so those interested can actually come in to check them out.”

Kim said the art hall is thinking about holding a small art fair that will sell “relatively affordable artwork by Korean artists” in the near future.

Both exhibitions stay open until around Christmas: the “Scharf Schak” until Dec. 25 and “Art & Desire” until Dec. 26.

To up footfall, department stores go all artsy