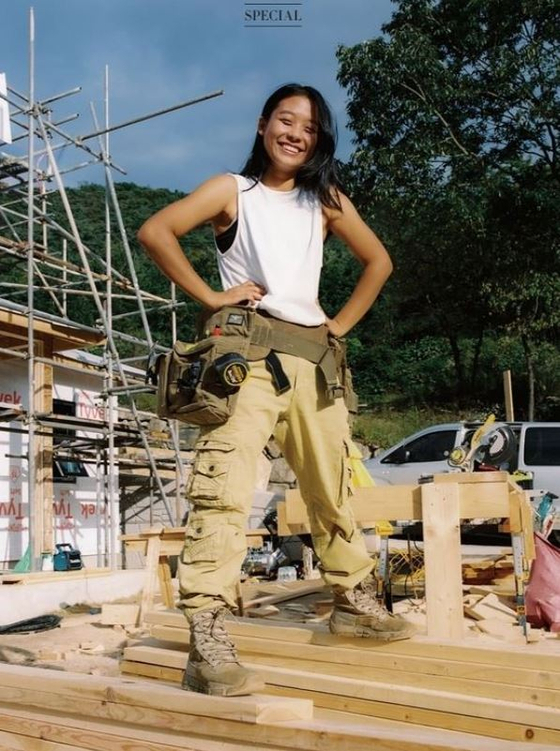 Lee A-jin, 19, dropped out of high school and is now a professional carpenter who specializes in lightweight wood frame construction. [HARPERS BAZAR KOREA]

Jin So-hee, 29, is one of the youngest professional female divers in Korea who also runs a YouTube channel about her life as a diver on Geojae Island, South Gyeongsang. [HA TAE-MIN] 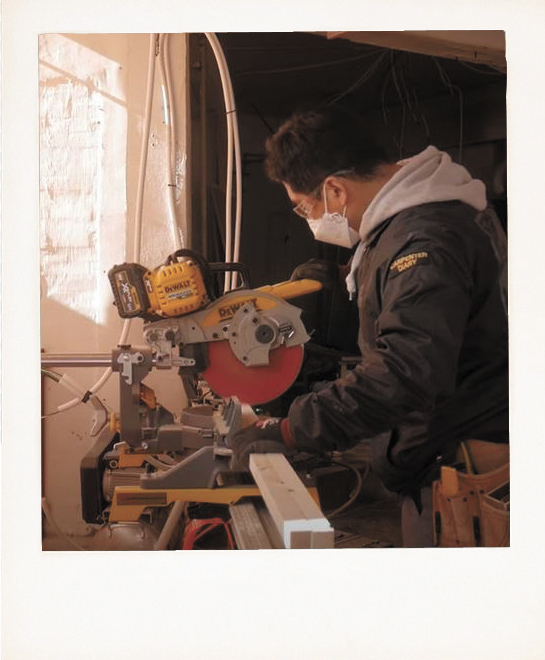 A young carpenter is working on a house while being filmed for hit YouTube channel “A Carpenter’s Diary,” which is run by a group of carpenters in their 20s and 30s. [HA TAE-MIN]


"From where I grew up, high-skilled labor jobs like house building or carpentry are perfectly respectable occupations that kids dream of having one day," said Lee A-jin, a 19-year-old professional carpenter.

Having grown up in Australia, Lee said that she has always wanted to work in the field of construction.

"I was shocked and disappointed to realize that these jobs are considered lowly in Korean society."

As a sophomore in high school, Lee decided that a higher education was not necessary for her career, so she dropped out of school and began work in construction by assisting her father who was a carpenter.

After years of rigorous field training, Lee is now the youngest employee at her residential construction company in Korea. She specializes in lightweight wood frame construction and gets paid up to 110,000 won ($93) per diem.

"Carpenters are skilled workers and artists who build one of the most quintessential parts of living — homes," said Lee, pointing out that the society's prejudices against her profession are unfair and often incorrect.

Like Lee, some of Korea's younger generation born into the demographic cohort of millennials and Generation Z, otherwise known as the MZ generation, are diverting to labor intensive blue collar professions that were previously associated with a lack of education and old age.

The erosion of traditional job ideals indicates that the younger generation are becoming more cognizant of the myriad of choices that they have in the labor market and are also tired of trying to measure up to society's narrow set of expectations.

Some major appeals of blue collar jobs include flexible hours, less stress from co-workers and bosses and maybe even higher wages.

Bae Yun-seul, 29, puts up wallpaper as a paperhanger and has a sociology degree from Yonsei University. She began work as a social worker but quit after only two years because she did not find it rewarding.

"After being ordered what to do all the time, I lost a sense of value in my work," said Bae.

"Even though blue collar jobs are disregarded in our society, I would rather bear a brief negative look from others than spend years doing work where I am not able to grow," she said.

Hong Jae-kwang, 37, said that he began work at a construction company as a tile installer for financial reasons when his baby was born.

Hong said that his monthly salary tripled since working in construction.

"People who go into the tile industry in their 20s can easily save enough money to buy a house by the time they are in their 30s," Hong said.

The trend of taking on blue collar jobs is being amplified through digital platforms as the tech-savvy younger generation display and promote their lifestyles online.

One popular YouTube channel, "A Carpenter's Diary," has around 9,500 subscribers and is run by a group of construction workers in their 20s and 30s.

The channel uploads two videos every week about interior design and carpentry. But many viewers watch the videos not to learn about carpentry, but rather because they find joy in watching the passion that shows through the workers' physical labor.

Jo Su-seong, 35, the director of the YouTube channel, said that all of his team members are very satisfied with their work.

"When I look at others in my age group, they simply choose jobs that match their majors, not ones that they enjoy or are passionate about," said Jo.

"Some may view our work as simple labor, but for us, it is meaningful work."

With 35,600 subscribers, the two upload vlogs about their lives as haenyeo in Geojae Island, South Gyeongsang.

Experts said that the recent diversions in the job market have long been overdue in Korea.

"Many young Koreans compete to get into only a handful of universities and companies that are considered prestigious and respectable," said Hugh Patrick, a scholar in Korean studies and business professor of Columbia University.

"Though such driven ambition and diligence aiming for the best served as important factors in Korea's rapid industrialization, the country needs more than just doctors and lawyers. All jobs should be respected and fairly compensated."

Secrets of the Gen MZ (KOR)