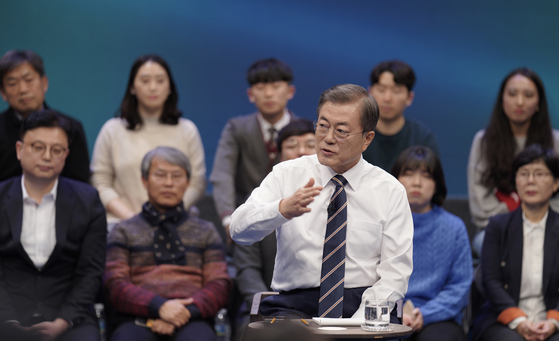 President Moon Jae-in speaks at a live town hall meeting on Nov. 19, 2019. He is scheduled to host such meeting once more to field questions from the public on his administration's Covid-19 policies. [YONHAP]


President Moon Jae-in will be taking questions from the public live on TV on Nov. 21 for 100 minutes to get a better understanding of people's thoughts on his administration’s Covid-19 policies, said the Blue House on Wednesday.

“The conversations will center on the topics of Covid-19 challenges and the economic livelihood of the people,” said Park Kyung-mee, presidential spokesperson, in a statement on Wednesday. “The televised conference will be shown live on KBS from 7:10 p.m. on Nov. 21.”

The last time Moon did something similar was two years ago this month, when his administration was entering the second half of its five-year tenure.

At the time, Moon fielded questions on inter-Korean ties, including the possibility of another summit between Washington and Pyongyang — former U.S. President Donald Trump had already met with North Korean leader Kim Jong-un two times that year — and Korea-Japan ties, especially on the possible termination of the General Security of Military Information Agreement, or Gsomia.

Moon also held live town hall meetings in January 2019, when he hosted a New Year’s media conference, and before that on the 100th day of his inauguration, as per tradition for Korean presidents.

Presidents Kim Young-sam, Kim Dae-jung and Roh Moo-hyun all had live TV conferences on or around their 100th day in office. Lee Myung-bak also held a special press conference on June 19, 2008, shortly after his 100th day anniversary, amid fierce street protests over his decision to reopen the Korean market to U.S. beef imports.

According a Realmeter poll last month, Moon’s approval was at 39.2 percent, the highest it’s been for any president during the second quarter of their last year in office.