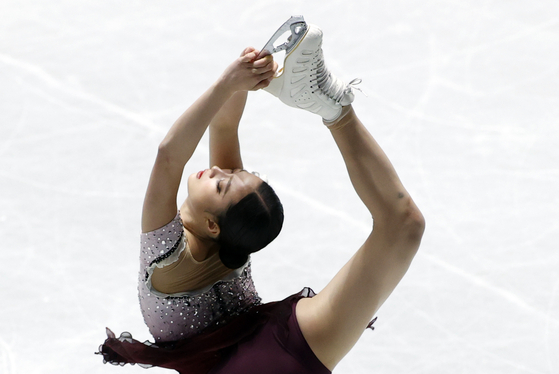 You Young skates during the women's free skating program of the ISU Grand Prix at Yoyogi National Stadium 1st Gymnasium in Tokyo on Sunday. [REUTERS/YONHAP]

You competed at the ISU event at Yoyogi National Stadium 1st Gymnasium in Tokyo, scoring 68.03 points for her short program to take third place on Saturday. This is You's second ISU Grand Prix bronze medal.

Performing to Alain Albert Boubill's "Les Miserables" soundtrack, You scored 69.03 in her Technical Element Score, 67.49 in her Program Component Score, and 135.52 for her free skating program after a point deduction: totaling a combined 216.97 points on Sunday.

Despite being one of the few women in the world who has a triple axel in her repertoire, she missed her landing and was deducted 3.2 points in her grade of execution.

This put You in second place for just her free skating program and in third place combined, behind Mana Kawabe of Japan with 203.6 points. Kaori Sakamoro won the gold medal with 223.34 points.

You won her first bronze medal at the ISU event in Las Vegas on Oct. 24. She scored 70.73 points for her short program on Oct. 23, then scored a season-best 146.24 points for her free skating program the next day for a combined 216.97 points.

You's free skating program points are the seventh best of all skaters this season.

Cha, Lee, You and Kim to figure skate for Korea in Beijing