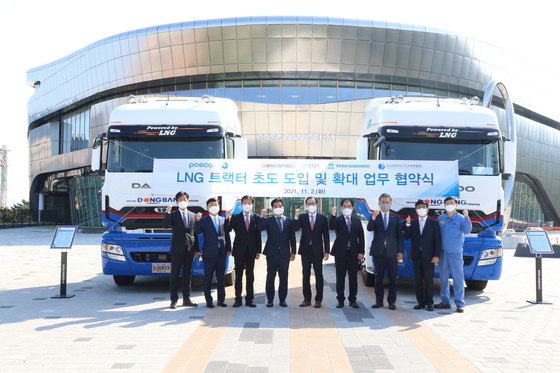 Kogas signs a memorandum of understanding with six companies to begin a trial run of liquefied natural gas-powered vehicles on Nov. 2. [KOGAS]

Korea Gas Corporation, or Kogas, is strengthening the link between its green energy projects to create a new business model, the company said.

To reduce fine dust, which has become a prominent social issue in Korea, Kogas is replacing diesel vehicles with liquefied natural gas (LNG) trucks, using the company’s knowhow accumulated over the last 38 years as an LNG supplier.

Diesel vehicles are blamed as a major culprit for the creation of fine dust in the transportation industry. LNG-powered trucks, in contrast, emit 19 percent less carbon dioxide, 96 percent less nitrogen oxide and 100 percent less fine particulate matter than diesel trucks, according to Ministry of Environment.

Moreover, though LNG vehicles have higher initial costs than diesel trucks, the former is more competitive in terms of maintenance costs over the long-term.

In 2018, Kogas was quick to introduce a prototype LNG truck co-developed with Tata Daewoo and the Korea Association for Natural Gas & Fuel Cell Electric Vehicles, and continues to lead the private-public partnership across industries.

Kogas signed a memorandum of understanding with 6 companies including Posco, Tata Daewoo and logistics firms such as Hanjin on Nov. 2. The companies are joining hands to begin a trial run of LNG trucks and expand the service year by year.

In addition, Kogas will provide 11 units of LNG tractors to Posco and logistics companies in Pohang, North Gyeongsang and Gwangyang, South Jeolla, and begin operations from November.

Furthermore, to secure a stable supply of LNG, Kogas is collaborating with Korea Expressway Corporation to establish LNG fueling stations.

Kogas also partnered with five companies, including Hyundai Rotem, in September to establish six hydrogen stations with the goal of building 30 stations by 2030.

"Kogas has been keen on the natural gas business since the 2000s, focusing on compressed natural gas buses, and has significantly contributed to improving air quality," an official from Kogas said.

"We will continue to lead the green energy transition with eco-friendly businesses to secure future growth engines and take the initiative in decarobnization in the logistics industry."