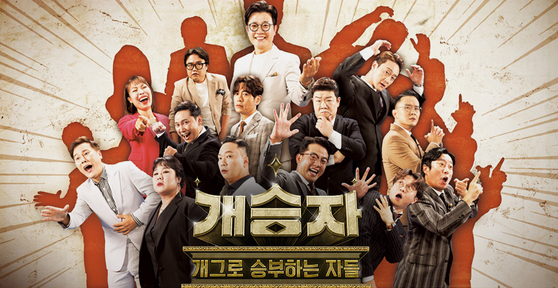 
KBS’s new comedy show “Comedy Survival Stage Turn” is a revival of the comedy television program “Gag Concert” (1999-2020). According to data from Nielsen Korea, the first episode, which aired on Nov. 13, opened a new era for comedy with a viewership rating of 5 percent.

“Gag Concert” was a sketch-comedy television show which starred many famous comedians like Kim Jun-ho, Kim Dae-hee and Kang Yu-mi, and even the two members of comedians-turned-boy band Mad Monster, Kwak Beom and Lee Chang-ho, made their debuts on the show. The show was popular nationwide, with its comedy sketches becoming recurring memes and catchphrases. However, as viewership ratings plummeted throughout the years due to lack of original content and the rise of YouTube, the show came to an end in June 2020.

“Comedy Survival Stage Turn” is bringing back all the original comedians that saw immense fame on “Gag Concert.” The twelve comedians, including Lee Su-geun, Park Joon-hyung, Kim Won-hyo and Oh Na-mi, have each formed their own teams in addition to one team that consists completely of rookie comedians. The 13 teams compete against each other with comedy sketches, and in every episode, one team is eliminated. The winning team will receive prize money of 100 million won ($84,500). 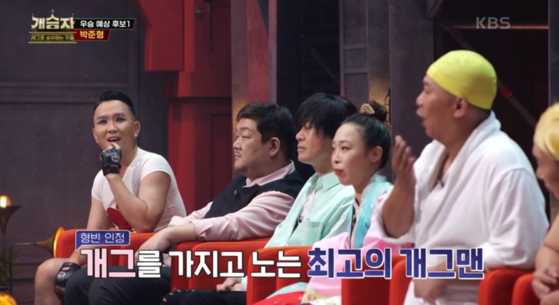 
While “Gag Concert” was just a series of sketches for about one hour and 30 minutes, the new competition format in “Comedy Survival Stage Turn” may seem similar to tvN’s comedy television show “Comedy Big League” (2011-). The difference, however, is that “Comedy Survival Stage Turn” goes a step further to show the audience the behind-the-scene process of forming teams and coming up with the scripts.

The first episode, which ran for 85 minutes, saw the 12 veteran comedians sit down and reminisce on “Gag Concert” for about an hour. It was 40 minutes into the first episode when the rules for the competition were finally explained and the existence of another team, but with rookies, was revealed. The show proceeded to air two sketches toward the end of the first episode from teams led by comedians Park Sung-kwang and Lee Su-geun.

“It doesn’t appeal to audiences in their 20s to 40s to brood over the past,” said pop culture critic Kim Heon-sik. “It’s crucial to leave a good first impression on viewers, but [the show] lost its chance.”

Culture critic Jeong Deok-hyun thought the opposite. “The show’s only just begun; explaining the narrative of the show was required. [The first episode] aimed to portray the team leaders’ determination to rebuild their reputations on the comedy stage.” 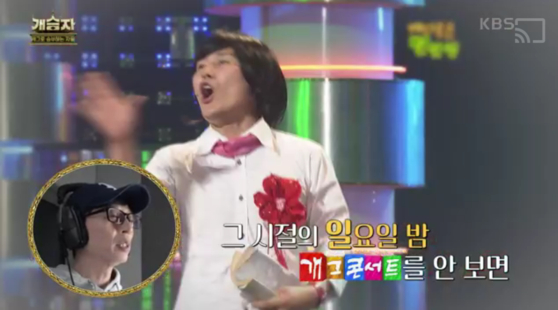 Television personality Yu Jae-suk, who debuted through a KBS open audition in 1991, narrated the opening for ″Comedy Survival Stage Turn″ for its first episode on Nov. 13. [SCREEN CAPTURE]


The show also made reference to the past when the comedians joked with each other about who was a "traitor" for appearing on other broadcasters' channels or divided each other based on who debuted through open auditions and who didn't.

Critic Kim noted that such scenes depicted KBS’s bureaucracy and how its deeply rooted rigid system has long affected comedians. “It was disappointing to see that the teams were filled with faces the public already knows well, and they were split into cliques.

“If the [new] show continues the ‘Gag Concert’ paradigm, then it’s a humiliation to the person who insisted that KBS needs a comedy program. No matter if the comedian debuted through an open audition or not, or even if they are a veteran or a rookie — what matters is that the viewers like them. [Comedy] needs new faces, and the viewers are there to decide [who wins in the end].”

When the show introduced the rookie team, some of the veteran comedians expressed regret about them not having enough opportunities to perform.

“If the show is ultimately deciding on who is the ‘heir’ [the Korean word for ‘heir’ has the same pronunciation as the Korean title for ‘Comedy Survival Stage Turn’] then it would need to have more rookies, yet the focus is solely on the comedians who have already established their careers,” critic Jeong said. “'Comedy Survival Stage Turn’ will gain more popularity only when it finds its own star rookie comedian.” 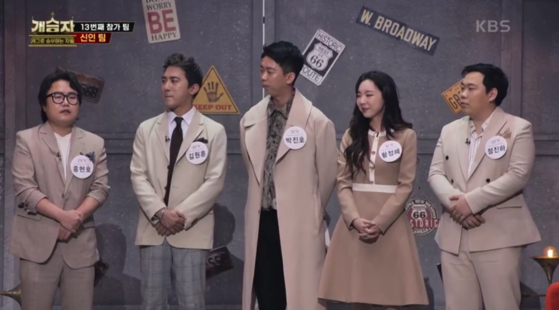 Out of 13 teams of comedians, only one team consists of ″rookies,″ or comedians who debuted later than their senior counterparts. [SCREEN CAPTURE]


One particular scene that makes the show distinctive was when comedian Hong Hyun-ho, who debuted in 2014 through KBS’s 29th open audition, rejects other senior comedians’ ideas. Hong is shown saying “We’re not allowed to use that as humor” or “I don’t think that’s going to work out well” to his seniors. Such scenes, where comedians criticize each other, have rarely been seen before.

In another instance, comedian Nam Ho-yeon throws shade at his team leader Park Sung-kwang, exclaiming things like “Don’t you think your jokes are all the same. What are you, a speech academy?,” “How in the world did you get famous!” and even “You think this is too much? Face it — it’s reality.” Comedians have started using criticism as material to make people laugh.

“This sort of commentary humor is introspective and self-deprecating, and it was fresh content for the debut of a new comedy program,” said Jeong. 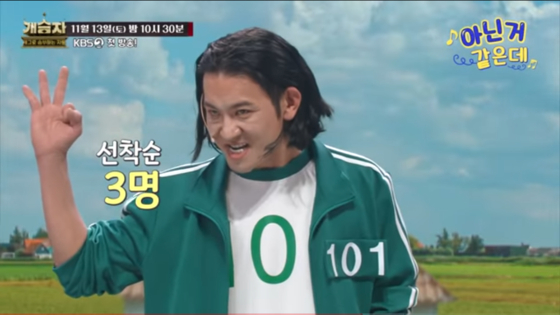 
Comedian Jeong Sung-ho, well-known for his past performances on SNL Korea, wore a green tracksuit as a parody of Netflix’s “Squid Game,” once again receiving positive reviews.

“Jeong is especially famous for parodying both fictional and real-life characters, and his parodies show what’s hot at the moment and make fun out of it,” said critic Jeong. “The constant research for what to parody attracts trendy, younger viewers and helps him shine on stage.”

Critic Kim also had a positive outlook. “'Comedy Survival Stage Turn’ is a KBS show, and the fact that it hasn’t limited the cast members to only those who debuted through KBS is a good sign. It was welcome to see comedians like Jeong, who debuted through MBC’s open audition in 1998, on a major television channel again after a long time.”