[Journalism Internship] New exhibit shows drag culture is for everybody

[Journalism Internship] New exhibit shows drag culture is for everybody 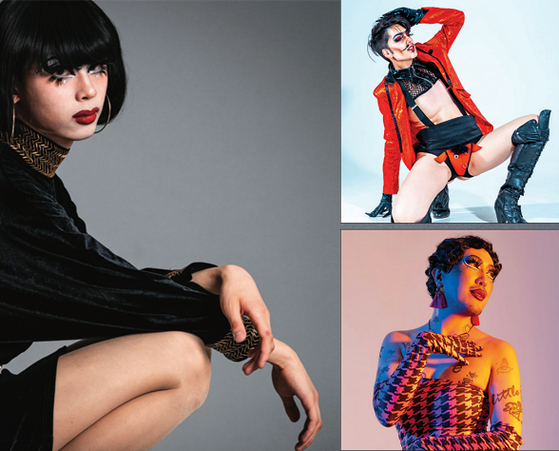 
“In general, people don’t usually have the opportunity to reflect deeply on their inner self,” said Moon Young-min, the photographer behind drag queen photo exhibit “Mainstream.”

Currently ongoing at The Closet in Mapo District, western Seoul, “Mainstream” is a series of exhibits that introduce cultures that are still seen as existing outside of the mainstream in Korea.

“Especially regarding your identity, your inner self, what you like,” Moon said. “By doing drag, people can abandon their outer self and approach their true selves. I think this is the charm of drag and why people should know about it and give it a chance.”

Moon started his photography career in 2016, but became captivated by the color and expression of drag after attending a show two years ago.

Drag culture is well-known and popular abroad, so Moon felt inspired to photograph and showcase the hidden drag artists of Korea.

Moon believes Korean society should begin to recognize drag to a certain extent, even if it does not become a part of pop culture.

“The reality is that few people know about drag except queer people, those who have been abroad and foreigners,” Moon added. “Drag artists say, ‘Only less than one percent of people know drag.’ It’s hard to say what Koreans think of drag right now.

“In Korea, when you accept a specific culture, the context of where it originated from and what aspects it has can get erased. There is also a dance called ‘voguing,’ which is a representative part of ballroom culture. Drag will become popular culture over time, even if it’s not through my exhibition.”

According to Moon, because of the pandemic, drag artists have lost their place to work and their visibility. The nightlife that they were a big part of has been put on pause indefinitely.

Becoming a model for Moon’s photo exhibit offered an alternate forum where the artists could act and be seen, making it significant both for Moon and the drag queens.

Moon first showcased his “Mainstream” body of work at Gallery Amidi in Sinchon in July, moving to The Closet this month. Both venues are supportive and welcoming of queer-friendly and socially disadvantaged people in various ways.

As the drag community is very small and tight-knit, finding models for the exhibit wasn’t too difficult once he met an artist by the name Hurricane Kimchi, through which he easily connected with more drag artists.

As it is important that their image not be conveyed in a negative way, so building trust and mutual respect was what mattered most, Moon says.

The exhibit consists of a total of 15 works and 12 interviews. The final piece in the exhibit, titled “Your Ego,” consists of the same wooden frame as his other works, but with a paper mirror instead of a photograph.

“The other day, while preparing for another shoot, I saw a phenomenon in which the reflected figure looked very blurry and I realized that it could not act as a mirror,” he said. The mirror instead shows a blurry self that Moon says is designed to prompt self-reflection.

“So the paper mirror doesn’t reflect things clearly like mirrors do,” Moon said. “But this is intended. Through this effect, more than just an unclear outer appearance, you should explore yourself.

“With drag stuff [in front of the mirror], you can try drag by yourself. Through this work, I would like to convey the message that drag is a more familiar performance art that anyone can do once in a while.”

The current exhibition at The Closet portrays the art as an interior accessory due to the venue also being a cafe. If you’re looking for a more complete exhibition experience, Gallery Amidi in Sinchon will display “Mainstream” along with other dragrelated records and artworks at the end of this month.

A preview of Mainstream along with Moon’s other work can be found on his Instagram at @mium_jpg.

UTAH2021 New exhibit shows drag culture is for everybody