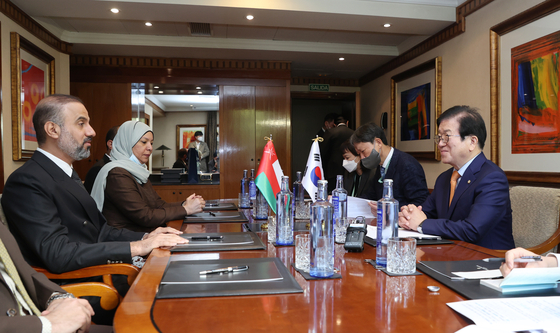 National Assembly Speaker Park Byeong-seug, right, speaks with Khalid Bin Hilal Al Mawali, chairman of the consultative assembly Shura Council of Oman, left, in their meeting held on the sidelines of the 143rd Assembly of the Inter-Parliamentary Union in Madrid, Spain, on Saturday. [OFFICE OF THE NATIONAL ASSEMBLY SPEAKER]


National Assembly Speaker Park Byeong-seug called on Oman to export its urea to Korea, after the country went through a nationwide shortage last month.

"Korea has temporarily suffered from a supply and demand problem with regard to urea," Park told Khalid Bin Hilal Al Mawali, chairman of the consultative assembly Shura Council of Oman, in their meeting on Saturday in Madrid, Spain. "I hope Oman can cooperate with Korea to resolve this issue."

Park is in Madrid through Monday to attend the 143rd Assembly of the Inter-Parliamentary Union (IPU).

Al Mawali responded positively, according to the speaker's office, stating that he will help "companies from the two countries build a cooperative relationship" and provide information on urea factories.

Park made a similar request during his meeting with Fawzia Bint Abdullah Zainal, speaker of the Council of Representatives of Bahrain, on Friday, according to his office.

Urea makes up roughly 30 percent of diesel exhaust fluid (DEF), which is needed for diesel cars and trucks to run.

Korea has been heavily reliant on China for its urea supply, and the market went into shock in October when China tightened its exports of urea, leaving Korea with a national DEF shortage. The shortage threatened Korea's supply chain network, which involves hundreds of thousands of diesel trucks.

After the meeting, Park delivered a speech at the IPU Assembly held under the theme of "Contemporary Challenges to Democracy."

"I believe that it is the calling of our time to resolve political and economic polarization and disparity and the resulting social division," he said. "I have to admit that the Republic of Korea is not immune to this trend [...] Political polarization is largely rooted in labor income inequality, failure of welfare and redistribution, and conflict of interests in innovation."

This was the second meeting between the two, following the first meeting at the 5th World Conference of Speakers of Parliament held in Vienna, Austria, in September.

Park additionally met with his Uzbek and Turkish counterparts, including Tanzila Kamalovna Narbayeva, chairwoman of the Senate of the Oliy Majlis of Uzbekistan.

"Korea is more than a strategic partner to Uzbekistan," she was quoted to have said in the meeting with Park on Saturday, according to Park's office. "After the successful re-election of Shavkat Mirziyoyev as president, he reviewed strategic areas for Uzbekistan's development and discovered that cooperation with Korea was the top priority."