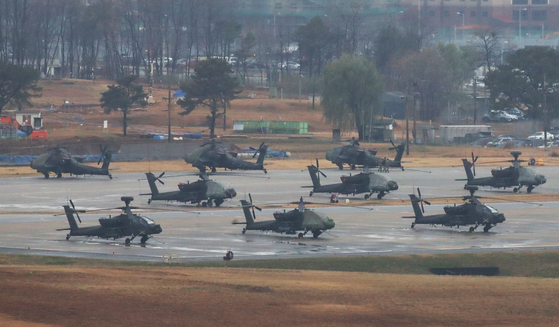 Apache helicopters are on standby at U.S. Army Garrison Humphreys in Pyeongtaek, Gyeonggi, Tuesday afternoon. The U.S. Department of Defense announced the results of its Global Posture Review Monday, which includes a decision to permanently station an Apache attack helicopter unit and artillery division headquarters in South Korea. [YONHAP]


The Pentagon reaffirmed the United States’ commitment to keeping its nuclear umbrella over South Korea, stressing that extended deterrence is “critical” following a months-long review of its global defense posture announced Monday.

When asked if the United States plans to continue to extend its nuclear umbrella over the region, Mara Karlin, deputy under secretary of defense for policy, said in a press briefing in Washington, “Our extended deterrence with our closest allies is critical, and I do not have anything to announce on changes regarding it.”

The U.S. Department of Defense revealed Monday it had concluded its 2021 Global Posture Review, which prioritizes the Indo-Pacific region and calls for cooperation with allies and partner countries to deter North Korean threats and potential Chinese aggression.

“In the Indo-Pacific, the review directs additional cooperation with allies and partners to advance initiatives that contribute to regional stability and deter potential Chinese military aggression and threats from North Korea,” according to the Pentagon in a press release.

“These initiatives include seeking greater regional access for military partnership activities; enhancing infrastructure in Australia and the Pacific Islands; and planning rotational aircraft deployments in Australia, as announced in September.”

“The global posture review also facilitated [U.S. Defense Secretary Lloyd] Austin’s approval of the permanent stationing of a previously-rotational attack helicopter squadron and artillery division headquarters in the Republic of Korea, which the department announced earlier this year,” said Karlin.

The Eighth U.S. Army earlier this year announced the decision to move the 5-17th Heavy Armed Reconnaissance Squadron and the headquarters of the 2nd Infantry Division Artillery to South Korea.

The artillery headquarters unit within the 2nd Infantry Division, which includes approximately 100 Soldiers, will be relocated to Camp Humphreys, said the Eighth U.S. Army in September. It added that the battalion-sized attack helicopter unit is expected to arrive in South Korea next year.

The Pentagon also affirmed that it will keep the U.S. Forces in Korea at the current capacity, dismissing speculation about a possible reduction of troops. There are around 28,500 U.S. troops stationed in South Korea.

Karlin, however, indicated that the review did not look into the resumption of large-scale joint military exercises between Seoul and Washington, which have been downsized since 2018 for the sake of diplomacy with North Korea and more recently because of the Covid-19 pandemic.

“I think we see that our posture in South Korea is robust and it is effective and so I have no changes that we would want to announce on that front,” said Karlin. “It’s a smart posture.”

She added the review “did not look at the issue of large-scale global exercise vis-à-vis South Korea.”

Karlin described China as America's “pacing challenge,” noting that the review directs additional cooperation with allies and partners to advance initiatives that contribute to regional stability.

The Pentagon will also focus on improving its bases in Guam and Australia and rearranging some troops in the Asia-Pacific region to better prepare to counter any threat from China.

It will send new rotational fighter and bomber aircraft to Australia and make a range of infrastructure improvements in Guam, including more fuel and ammunition storage, said Karlin. Improvements to airfields in Guam and Australia will expand the ability of the U.S. military to send troops in and out of the region for deployments or in a conflict. The focus on the Indo-Pacific region could come with a reduction of the number of troops and equipment in other areas of the world

Addressing how China might view the U.S. posture in the region, stressing that strategy shapes posture, Karlin said, “In the Indo-pacific, we’re moving the needle a bit, and over the coming years you will see that needle move more and more.”

Referring to the renewed U.S. commitment to its nuclear umbrella over South Korea and the permanent stationing of the attack helicopter squadron and artillery division headquarters, Seoul’s Ministry of National Defense said Tuesday it was evidence of the importance of the bilateral alliance.

Boo Seung-chan, the Defense Ministry spokesman, told reporters in a briefing that South Korean and U.S. defense authorities have been in “continuous communication,” when asked if Seoul had been informed about the results of the global posture review.

He added, “I think it is proof that the South Korea-U.S. alliance is important from the perspective of both countries.”

Former U.S. President Donald Trump indicated he may like to eventually see a withdrawal of U.S. troops in South Korea and often questioned the necessity of an extended nuclear umbrella in the region.

U.S. President Joe Biden ordered the global posture review in February, and U.S. Defense Secretary Austin led the review in coordination with allies and partner countries, according to his department.

Biden accepted the recommendations made by Austin on the global posture review, Karlin said Monday.

The United States had around “75 consultations" with allies and partners in the process of putting together the review, including NATO allies, South Korea, Australia and Japan, she added.

Austin was set to depart for Seoul Tuesday to attend the annual South Korea-U.S. Security Consultative Meeting (SCM), where he is scheduled to meet with South Korean Defense Minister Suh Wook and other top military officials Thursday.