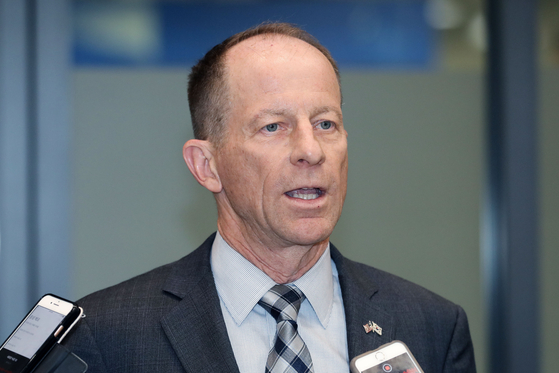 
There are no discussions currently taking place at the U.S. State Department regarding the withdrawal of American troops from Korea, a senior U.S. diplomat told a Senate panel Thursday.

"Of course, these issues all require cooperation. So we will consult [with South Korea], but there is no discussion of that in the State Department," David Stilwell, assistant secretary of state for East Asian and Pacific Affairs, told the Senate Foreign Relations Committee.

His remarks came in response to questions from Senator Chris Coons, who asked if the Trump administration is no longer considering troop withdrawals from the South, and if Washington will consult closely with Seoul if it makes such a change.

However, Stilwell's reassurance does not necessarily reflect the situation throughout the administration, such as possible discussions at the White House or the Pentagon.

Recent news reports have indicated that Trump hinted at the possibility of troop cuts as a bargaining chip as the two countries continue to negotiate the cost-sharing agreement on the upkeep of 28,500 American troops in Korea. While Seoul has offered to increase its annual commitment by up to 13 percent from the $870 million it paid last year, Washington is reportedly demanding a 50-percent hike.

Trump initially demanded that Seoul pay $5 billion per year, sources familiar with the negotiations have said.

The United States recently removed some of its troops from Germany, fueling speculation that it could make a similar move in Korea. In July, Washington said it will cut the level of U.S. troops in Germany from 36,000 to 24,000, a decision that news outlets reported was made without prior consultation with Berlin.