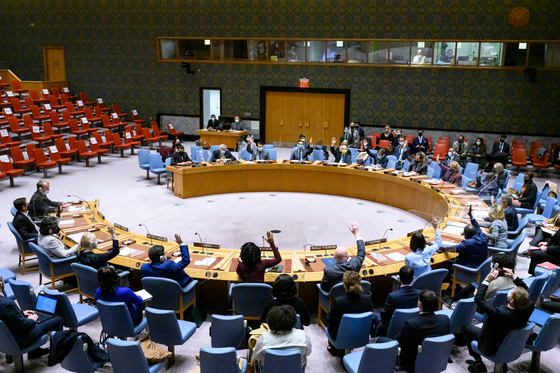 The UN Security Council agrees to extend the authorization of an EU-led peacekeeping force in Bosnia and Herzegovina for 12 months, at the UN headquarters in New York on Nov. 3. [LOEY FELIPE/UN/XINHUA]

Korea decided to go completely virtual with its UN ministerial meeting on peacekeeping due to concerns surrounding Omicron, a coronavirus variant rapidly spreading in southern Africa and some parts of Europe.

“After consulting with our partners in the African Union and the United Nations, we have decided to host the UN Peacekeeping Ministerial meeting as scheduled, on Dec. 7 and 8, but completely virtually,” said a Foreign Ministry official in a meeting with a group of reporters at the ministry in Seoul on Wednesday.

The conference, hosted by an Asian country for the first time, was expected to gather officials, including ministers from 155 countries members to the Special Committee on Peacekeeping Operations, and over 1,000 people total. It would have been the country’s largest scale in-person conference since the onset of the pandemic.

“We decided to hold the conference as scheduled, but virtually, instead of postponing it, because it would have been too much to try to reschedule and coordinate with 154 other countries,” said the ministry official.

The Korea-Africa Forum, however, which was scheduled for Dec. 9 and 10, has been postponed to next year, according to the ministry.

"It was a decision we reached after discussing all options with the African Union," said another ministry official in the meeting with the press.

With the rise of Omicron in southern Africa, Korea closed its borders to all foreign travelers from eight African countries — South Africa, Botswana, Zimbabwe, Namibia, Lesotho, Eswatini (formerly Swaziland), Mozambique and Malawi — as of last Sunday. All are members of the African Union and had been invited to the Korea-Africa Forum.

Korea on Wednesday reported its first suspected cases of Omicron infection. A Korean couple who traveled to Nigeria and returned last month are suspected to have contracted the Omicron variant, and were being inspected by health authorities as of press time Wednesday. They have infected at least two other people, according to the health authorities.

The flight that the couple took to Korea from Nigeria had 81 passengers total, of whom 45 landed at Incheon International Airport as their final destination.

Health authorities are also looking into two other individuals who may be infected with the Omicron variant — one Korean who returned from Germany on Nov. 29 and one British national who flew into Korea from the Netherlands on Nov. 28.

The peacekeeping meeting will be streamed live on YouTube.