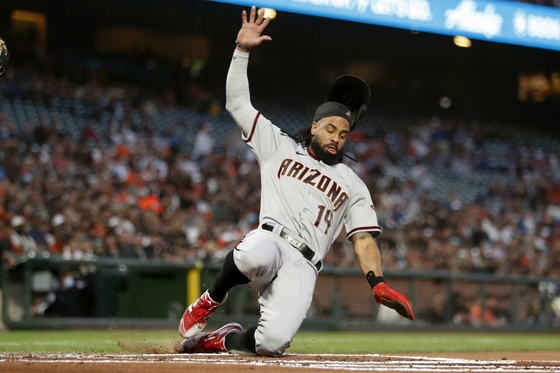 Henry Ramos slides home for the Arizona Diamondback during a game against the San Francisco Giants in San Francisco on Sept. 30. [AP/YONHAP]


The KT Wiz announced Wednesday that they have acquired former major leaguer Henry Ramos on a one-year deal worth up to $1 million.

Ramos made his major league debut with the Arizona Diamondbacks this season, batting .200 over 18 games with one home run and eight RBIs.

Ramos is the first foreign player to be signed to the KBO for next season. Each KBO club is permitted to sign three foreign players, with a maximum of two foreign pitchers. In practice, most teams generally opt for the maximum two pitchers with a slugger to round out the selection.

All foreign players play on one-year contracts, so clubs still have to renegotiate with last season's stars if they want them to return next year.

Although Ramos is the first foreign player signing to be announced, KBO clubs have already made it clear which players they don't plan to bring back. The KBO on Tuesday released a list of the 44 players that clubs do not intend to negotiate a new contract with, including a number of foreign players.

For the reigning champion Wiz, Jared Hoying, who joined the club in June after three years with the Hanwha Eagles and a brief spell with the Toronto Blue Jays, is the only player facing the chopping block.

The second-place Doosan Bears are cutting ties with injured pitcher Walker Lockett, while the third-place Samsung Lions have dropped pitcher Mike Montgomery, who was suspended at the end of the season after an altercation with an umpire.

The fourth-place LG Twins have cut ties with slugger Justin Bour, who struggled at the plate this season and ended up in the Futures League.

The foreign players who were not included on the KBO list — including all three players at the Kiwoom Heroes and NC Dinos — will receive offers from their clubs, although negotiations are ongoing. The players that have already parted ways with their clubs are still free to join a different KBO team.