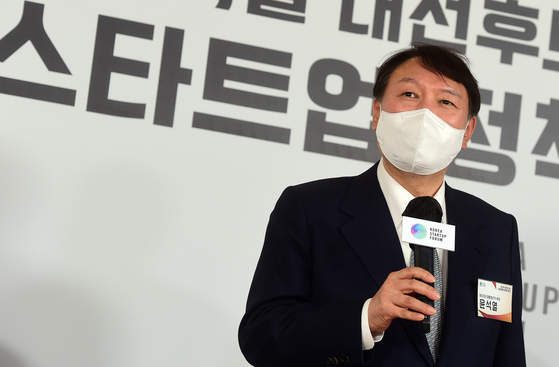 
People Power Party presidential candidate Yoon Suk-yeol vowed to ease regulations for start-ups and protect them against big companies, echoing promises from rival candidate Lee Jae-myung as they battle to win the votes of constituents in tech.


“I will actively support new businesses by creating 'negative' regulations and supporting reform into an ‘one-stop’ regulation system,” said Yoon at a meeting with start-up CEOs on Thursday.

Korea currently has "positive" start-up regulations, which means laws and guidelines specifically list things companies can do, while anything not mentioned is prohibited. "Negative" regulations would list what companies can’t do and allow everything else.

One of Yoon's main proposals was a speedier approval process for regulation exemptions.

He said that government institutions should reply within a set period of time when start-ups request easing of restrictions. If it fails to give an answer within a designated period, the start-ups could go ahead as if they had received a positive response.

“Responsibility to approve regulation exemptions are now divided into many government offices and ministries, but should be done at one organization so that one is fully in charge of all regulation-related measures from start to end,” said Yoon. 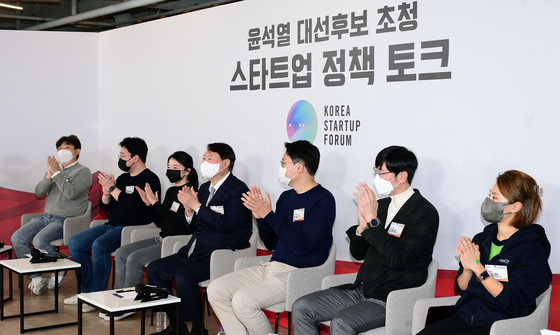 
CEOs called for more freedom from regulations, which they consider to be harsh. The so-called regulatory sandbox program, which allows new and innovative businesses to be exempt from regulations for a minimum two years, was also condemned.

Icon Loop CEO Kim Jong-hyup said his company’s block chain-based ID verification system was approved by the regulatory sandbox program, but with additional conditions that had to be followed. Kim went back to request the conditions to be revised, but said it was “almost impossible to do because the institutions don’t aim to vitalize start-ups, but work to regulate them.”

“The sandbox program was started to apply 'negative' regulations to some businesses, but it still felt like a 'positive' regulation system in which we have to get permission for each scenario we want to pursue,” said Kim.

Another area of support promised was preventing big name companies from stealing ideas and technologies of start-ups.

“If we don’t regulate against misappropriation of new ideas, it will be very difficult for small companies to grow into big ones,” said Yoon. “This could be considered as a regulation against conglomerates, but if there is none, it’s almost impossible for innovative and creative start-ups to survive.”

Following the event, the Korea Startup Forum created a non-fungible token (NFT) with Yoon. A handwritten message that read “Korea’s future is in start-ups” was turned into an NFT on Craft Network.