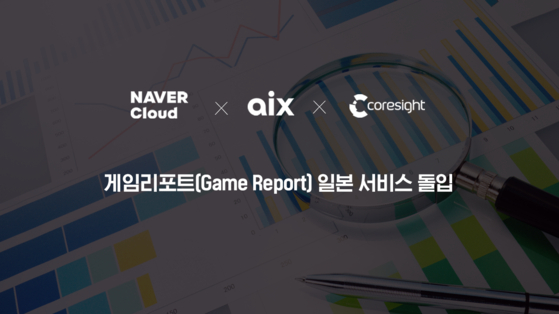 
Naver Cloud is working with a tech and a marketing company to sell its cloud-based game data analyzer in Japan, Naver's cloud subsidiary said on Monday.

Under the terms of the agreements, Coresight and aix will support the sale of Naver Cloud's Game Report game management solution, a cloud-based big-data analysis solution co-developed with Coresight, in Japan.

This is the first time for Game Report to be exported. In Korea, it is deployed by DK mobile, Team Tapas and Moai Games.

The solution -- a term used in the tech industry to refer to a set of software programs and services -- collects and processes the data from a game to analyze user behavior to provide better gaming experiences for players.

It collects the data of real-time in-game transactions to balance out any bugs or system failures and analyzes user patterns that occur as a reaction to special events.

Coresight, a game data analysis company, provided its data processing technology when Game Report was first released in January and will be tasked with operating the service in Japan.

The Japan-based aix will be in charge of marketing and promoting Game Report in the local market.

The first Japanese game company to implement Game Report will be Mobidic, which services massively multiplayer online roleplaying game (Mmorpg) League of Angels III. The three companies will work to promote the solution to other companies, Naver Cloud said.

"We will take this chance to bring out meaningful results not only in Japan but from the global market with our cloud services," said Hong Kwang-pyo, executive director of Naver Cloud's global IT & business management.