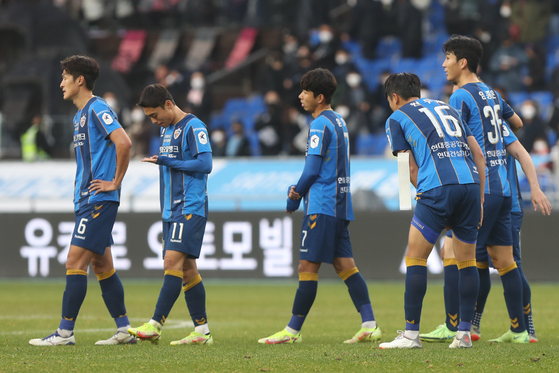 
Ulsan Hyundai finished runner-up in the K League on Sunday, capping off an anticlimactic season that saw them slip two points behind winner Jeonbuk Hyundai Motors despite a 2-0 win against Daegu FC on the final day. It was their 10th runner-up finish.

Jeonbuk and Ulsan headed into the final two weeks of K League action the same way they did last year: With Jeonbuk two points ahead. Despite Jeonbuk's advantage, Ulsan fought hard on Sunday, hoping to win the title for the first time in 16 years. However, Jeonbuk were able to keep the two-point difference until the very end with a 2-0 victory over Jeju United on Sunday.

Missing out on the K League title rounds off a hugely anticlimactic season for Ulsan, a dramatic reversal from a couple of months ago when the club was in with a serious shot at becoming the first Korean team ever to win the treble — the AFC Champions League, FA Cup and K League title. 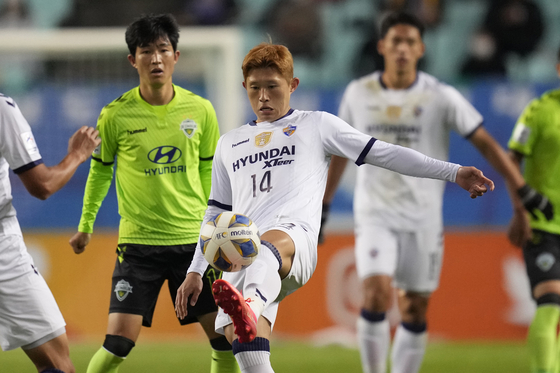 
It wasn't until October that the dream started to go wrong for Ulsan.

On Oct. 20, Ulsan reached the quarterfinals of the AFC Champions League only to lose against the lower-ranked K League club Pohang Steelers after the Steelers turned the tables in the very last minute of the match.

Ulsan had opened the scoring in the 51st minute and just when it seemed Ulsan had the game locked up, Pohang leveled the score with a last-gasp header. With neither team able to score any more, the game went to penalties and Pohang won the shootout 5-4 to advance to the AFC Champions League final for the first time since 2009, cutting off Ulsan's bid to defend their title and also ending their treble bid. Last year, Ulsan took the top title in Asian club football, beating Iran's Persepolis FC 2-1. 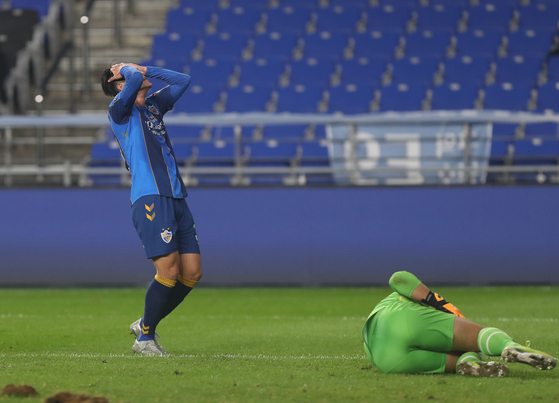 Ulsan Hyundai's Hong Chul, left, reacts after missing a shot against Jeonnam Dragons in the semifinals of the 2021 FA Cup on Oct. 27 at Ulsan Munsu Football Stadium in Ulsan. [YONHAP]


Just a week later, on Oct. 27, Ulsan's double bid fell apart after another devastating loss against K League 2 side Jeonnam Dragons in the semifinals of the 2021 FA Cup.

That same week, Ulsan also slipped to second place on the K League standings after taking a 2-1 loss to Seongnam FC. Despite briefly reclaiming the lead alongside Jeonbuk, Ulsan lost the big showdown 3-2 against their rival on Nov. 6 to fall back to second place.

"Every match was important," Jeonbuk head coach Kim Sang-sik said on Sunday. "But winning the big showdown against Ulsan [on Nov. 6] was an important achievement."

That loss may well have been the final nail in the coffin for Ulsan, who were unable to reclaim the lead until the very end of the season.


"We failed to win the title once again," Ulsan head coach Hong Myung-bo said on Sunday. 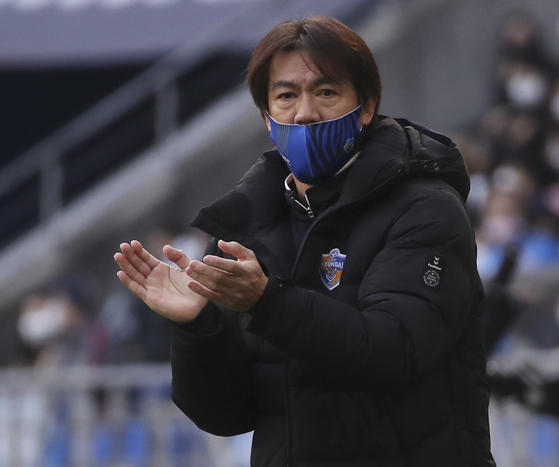 
This is Hong's first year as head coach. Ulsan canned coach Kim Do-hoon last year after narrowly missing out on the trophy for the two previous seasons.

"The start of the season was difficult," said Hong. "There were some players who wanted to leave the club and it was hard to keep them with the club. Winter training was insufficient [because of the 2020 ACL]. We also lost a lot of time to train due to international fixtures."

Ulsan are now in talks to bring Kim Young-kwon of Gamba Osaka to their defense line for the following season.

"That will be announced by the club once its decided," said Hong. "For now, I would like to look back at our season and find ways to improve."

"But I am proud thanks to our players. There were some difficulties but I think we overcame them. I am happy to have won the last match at home. We will prepare for a better season next year."