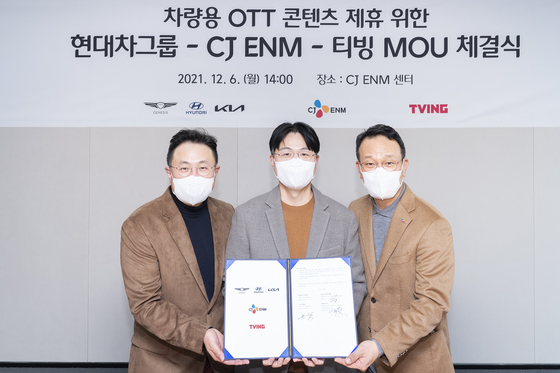 
CJ ENM announced a partnership with Hyundai Motor Group to offer its TV shows on the company's cars, as drivers are expected to need more entertainment in the era of autonomous driving.

Tving is an over-the-top streaming service 70.5 percent owned by CJ ENM. It offers original content and shows that air on broadcasting channels such as tvN, OCN and Mnet.

With the partnership, CJ ENM will make more shows and audio content for drivers. Tving will focus on upgrading its streaming application so that it can be used in cars.

Hyundai Motor Group will develop its connected-car infotaintment system so that the Tving app can be used.

Drivers and passengers in Hyundai Motor, Kia and Genesis cars will be able to watch Tving videos on the vehicle's digital screens.

“Cars won’t just be considered a means of transportation in the era of autonomous driving, but become a moving media platform that increases the importance of entertainment content,” said Lim Sang-yup, chief operating officer of CJ ENM.

“CJ ENM will continue to partner with Hyundai Motor Group so that programs on Tving and other audio content can be supplied to their connected car service.”