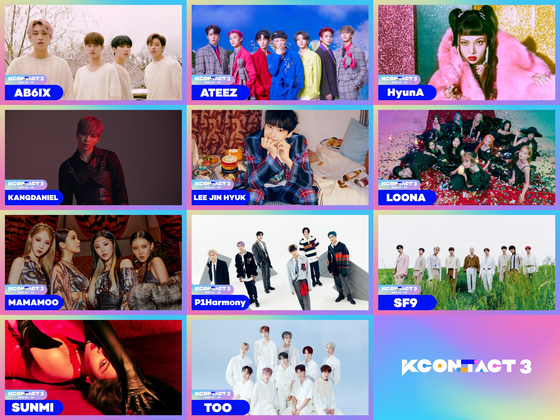 KCON:TACT is the online version of the annual Korean culture and music convention KCON. The third KCON:TACT will take place from March 20 to 28.

A total of 26 K-pop acts will perform over the span of nine days. Concerts will be held online during the nine-day event, virtually recreating the locations of previous offline KCONs.

Fans in Korea will be able to stream the concerts exclusively on Korean streaming platform Tving, while fans abroad can participate via YouTube and Mnet’s K-pop channel.

Various interactive opportunities between stars and fans will be available.

KCON is normally hosted at multiple locations around the world, including cities in the United States, Japan, France, the United Arab Emirates, Mexico, Australia and Thailand.

Since the Covid-19 pandemic, KCON switched to an online version named KCON:TACT. Two KCON:TACTs were held in 2020, featuring 60 K-pop acts and viewed by 8.45 million international fans.