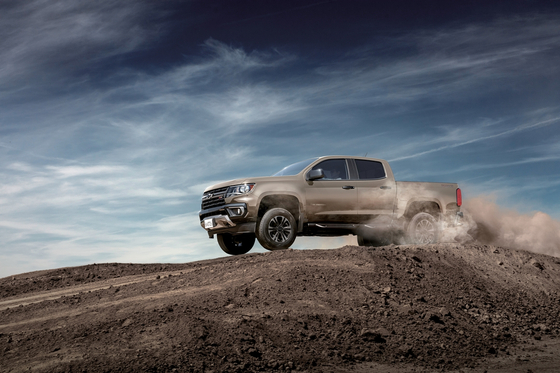 It wasn't long ago that Korea's roads had nothing but boring sedans, until campers discovered the glories of SUVs.

According to the Korea Automobile Manufacturers Association, sales of pick-up trucks in Korea, which had stalled at around 20,000 units per year until 2017, jumped to 42,000 units in 2019, a more than 80 percent rise in just two years. Last year, some 38,000 pick-ups were sold.

Which means new models will soon be coming from abroad.

The fact that pick-up trucks are categorized as commercial vehicles and are not liable to the special consumption tax is also driving sales.

A partially revamped model was rolled out on Monday.

GM Korea hopes the new model, with an updated transmission system, will add to the mystique.

The Colorado sold 3,551 units in the first 10 months of this year, making it the top imported model in Korea, beating the German sedans that usually claim that crown.

Ford introduced two pick-up trucks in Korea early this year, trying to get a piece of the growing pie.

The Ranger Raptor and Ranger Wildtrak were launched in April and sold 821 units through October.

SsangYong Motor is the only domestic carmaker offering a pick-up truck and it's become the carmaker's savior.

The Rexton Sports sold 3,159 units in November, the most of any model vehicle.

Hyundai Motor recently launched a pick-up, the Santa Cruz, but it is currently sold only in North America.

The segment’s growth is likely to continue next year and new models are coming.

GM Korea announced last month that it will bring in GMC’s Sierra pick-up truck next year to boost its domestic sales.

Sierra is a pick-up that dates to 1998. GMC targets the premium truck market.

Japanese commercial vehicle brand Isuzu is  bringing its D-Max pick-up model to Korea in the first half of next year. D-Max is being sold in 100 countries and will be sold in Korea through domestic distributor Curo Motors.