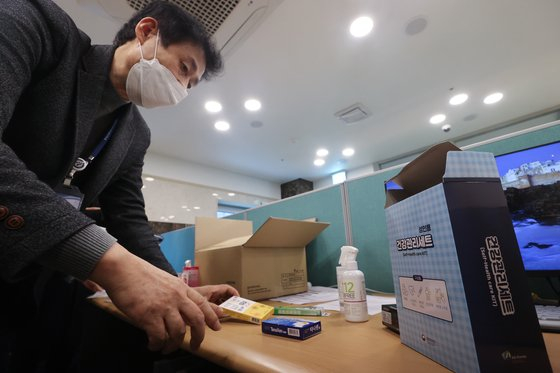 A health official displays the contents of the Covid-19 treatment kit that is distributed to patients who get treated for the virus at home, at a residential treatment center in Yeongdeungpo District, western Seoul, on Nov. 18. The kit contains medical items that an average person can readily use such as flu medicine, an oximeter, a thermometer and hand sanitizer. [JOINT PRESS CORPS]


“Silvertowns these days are more like zombie towns,” said one 66-year-old resident at a silvertown in Giheung District, Gyeonggi.

“Many of us [including people in their 70s and 80s] are in self-isolation and receiving at-home treatments [for Covid-19]. I only see my neighbors when I’m getting food from the cafeteria.”

As "silvertowns," otherwise known as private, elderly residential complexes, have been getting hit with massive cluster infections amid the national dearth of hospital beds since November, virus-positive residents are being deprived of proper medical care and treatment.

A total of 66 elderly residents at the Giheung District silvertown tested positive for the virus after an outbreak that started late last month from a man who used the complex’s public bathhouse.

While the average age of residents in the complex is 76, most of these elderly patients who tested positive were prescribed at-home Covid treatments.

According to the Central Disease Management Headquarters’ regulations of at-home Covid-19 treatments, only those under the age of 70 who are either asymptomatic or mildly symptomatic are supposed to be eligible for these treatments.

“My neighbor, who is in his 80s, tested positive for the virus Nov. 26 and yet was assigned to at-home treatments,” said the 66-year-old resident.

“He wasn’t even given medicine and was barely holding on until a few days later when he was finally transferred to a military hospital in Ilsan [because all the civilian hospitals’ intensive care units, or I.C.U.s, nearby were filled].”

An official from the Ministry of Health and Welfare said that they are trying to transfer critically ill patients in silvertowns to hospitals, but sometimes they cannot because the elderly patients do not always cooperate with them.

“Some feel uncomfortable leaving their hometowns, so they don’t want to go to a hospital far away,” said an official from the ministry.

“Also, some don’t properly report their symptoms in fear that they will be negatively stigmatized in their community.”

Still, the underlying problem behind the large number of elderly patients receiving at-home treatments is the lack of sickbeds for Covid-19 patients across the nation.

A total of 88.1 percent of Covid I.C.U. beds in the greater Seoul area and 79.2 percent in the entire country were occupied as of Thursday, according to the Korea Disease Control and Prevention Agency (KDCA).

The 66-year-old resident at the complex said that when he tested positive with Covid-19, he was assigned to at-home treatment, though he lived with his wife who did not have the virus.

“We used separate bathrooms and everything, but it was only a matter of days until she caught the virus from me,” the resident said. “At-home treatments seem no different than telling the people we live with to catch the virus as well.”

“At-home treatments are just a nicer way to say treatment-in-waiting — it is more like neglect than treatment,” said a member of the People's Solidarity for Participatory Democracy at a press conference in Jong District, central Seoul, on Thursday.

“At-home treatment is just another way to hide the fact that our country is running out of sickbeds.”

Experts say that alternative setups need to be erected to hospitalize more Covid-19 patients and properly take care of them.

“In order to overcome this situation, we need to build new hospitals that only take in critically ill Covid patients and also need to gather medical staff to work there,” said Kim Dong-hyeon, professor of preventative medicine at Hallym University.

“We are at a point in the pandemic where we need to prepare for the worst.”

One step ahead of humans (KOR)