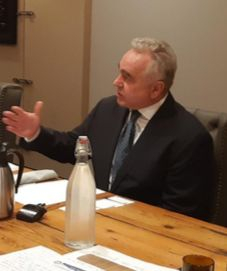 Campbell, the National Security Council coordinator for the Asia-Pacific region, admitted that the United States has “not had success” in its efforts to engage North Korea, but added that the current administration of U.S. President Joe Biden is “still determined to put [its] best foot forward with respect to diplomacy,” in remarks to reporters after a forum in Virginia hosted by the Chey Institute for Advanced Studies, a think tank operated by SK Group.

While the policy coordinator did not specify how Washington might successfully engage Pyongyang in response to a question about the current stalemate, he did say that it would work together with Seoul to seek “the best way.”

Campbell’s comments come during an ongoing suspension of dialogue between the United States and North Korea.

Pyongyang has refused to engage in denuclearization talks with Washington since 2019, when the summit in Hanoi, Vietnam, between then-U.S. President Donald Trump and North Korean leader Kim Jong-un collapsed without an accord.

The talks broke down after the two countries failed to reach an agreement about the sequence of denuclearization and relief for ongoing international sanctions against the North.

The North wanted the United States to lift sanctions first, before any further concessions from the North on denuclearization, especially concerning the North’s nuclear facilities in Yongbyon.

Since then, the North has proceeded with several missile weapons tests, the most recent one being a submarine-launched ballistic missile (SLBM) test in October.

It has also ignored repeated attempts at dialogue from the Biden administration, which took office in January.

Campbell indicated that both the United States and South Korea are working hard to coordinate an effort to bring the North back to the negotiating table.

“That dialogue [between Seoul and Washington] is very strong, and we continue to be joined at the hip with respect to our outreach to Pyongyang,” he said.

His positive assessment of U.S.-South Korea dialogue regarding the thorny issue of the North and its nuclear arsenal comes as U.S. officials in public have cautiously welcomed South Korean President Moon Jae-in’s goal to achieve a formal declaration ending the current legal state of war on the Korean Peninsula.

The 1950-1953 Korean War ended with only an armistice, and no formal peace treaty.

The Moon government has been pushing for an official declaration to end the war in recent meetings with the Joe Biden administration, and in recent weeks the two sides have been working on the wording of such a declaration.