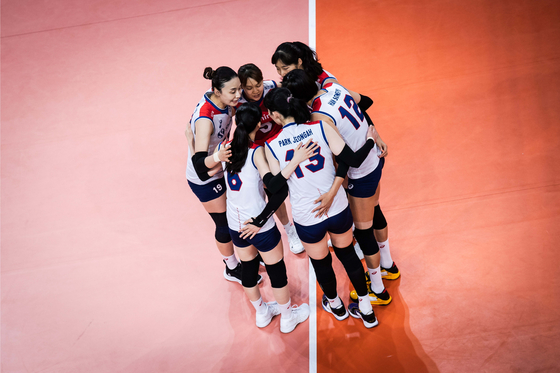 The Korean women's national volleyball team huddle up during a 2021 Volleyball Nations League match against the United States on June 7 in Rimini, Italy. [VOLLEYBALL NATIONS LEAGUE]

The Fédération Internationale de Volleyball (FIVB) announced Wednesday that the 2022 edition of the VNL will be held in the United States, Turkey, Brazil, the Philippines, Canada and Russia. While last year’s VNL was played in a bubble with all matches held in Rimini, Italy, the 2022 VNL will return to its original format where 16 countries compete in a round robin across six cities around the world.

Korea joins 15 other countries — the United States, Brazil, China, Turkey, Serbia, Italy, the Dominican Republic, Russia, Japan, the Netherlands, Germany, Belgium, Canada and Thailand. Korea is No. 14 in the world rankings and the only two countries that rank lower are No. 18 Canada and No. 19 Thailand.

Last time around, Korea finished second-to-last with three wins and 12 losses, one ahead of last-place Thailand. But numbers don’t tell the whole story, as VNL was always going to be a difficult outing for Korea. Despite the losses, Korea were able to use the tournament as an opportunity to work on teamwork and tune up for the 2020 Tokyo Olympics.

Stefano Lavarini, the team's head coach at the time, proved that teamwork on the big stage, earning his space in the annals of Korean sporting history after his underdog squad fought their way through higher-ranked opponents to finish in a historic fourth place.

Lavarini, the first foreign coach to lead the Korean national team, has been widely credited for the success of the team, drawing comparisons to Guus Hiddink, the football manager that led Korea to the semifinals of the 2002 World Cup.

Of course, former captain Kim Yeon-koung was also in the middle of it all, leading the team to put up a fight against the stronger opponents. Alongside Kim, veteran Yang Hyo-jin played the VNL and the Olympics with Kim Su-ji joining them on the big stage after missing out on the VNL due to an injury.

As Lavarini, Kim Yeon-koung, Kim Su-ji and Yang have all stepped back from the national team after the Tokyo Games, this year’s VNL will be more about how more experienced players like Park Jeong-ah and Pyo Seung-ju step into the veterans' role, and how well younger players adapt to the international stage while coordinating with new head coach Gonzalez. 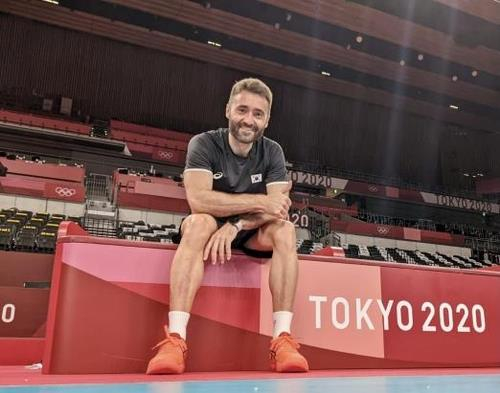 
Gonzalez was appointed as head coach in October for a three-year term from 2022 to 2024. He was the assistant coach under Lavarini from 2019 to 2021. His debut with the team will be at the VNL, and he is expected to lead the team to the Paris Olympics. Gonzalez started his coaching career in 2001 in Spain, working with Turkish club VakifBank Istanbul before coming to Korea.

The men’s national team will not be playing at the VNL.

Korea will play their first week from May 31 to June 5 at Shreveport-Bossier City in Louisiana. Then they will move to Brazilia in Brazil to play the second week from June 14 to June 19. The third week will take place in Ufa, Russia from June 28 to July 3.