Yoon's wife says she intends to apologize for 'causing distress'

Yoon's wife says she intends to apologize for 'causing distress' 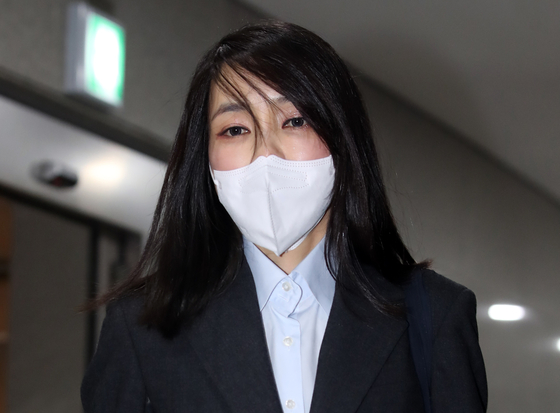 
Kim Keon-hee, the wife of Yoon Suk-yeol, presidential candidate of the main opposition People Power Party (PPP), says she intends to apologize after being faced with a barrage of new allegations from ruling party lawmakers on Wednesday that she falsified her résumé to land teaching positions at universities.

Kim, who was accused by Democratic Party (DP) lawmaker Kwon In-sook in November of exaggerating her teaching experience on a 2007 résumé she submitted for an adjunct professorship at Suwon Women’s University, was freshly accused by Kwon and fellow DP lawmakers An Min-suk, Do Jong-hwan and Seo Dong-yong of falsifying awards on a résumé she submitted to Anyang University in 2013.

According to the DP lawmakers, Kim claimed on the résumé she submitted to Anyang University that she received the top award from the 2004 Seoul International Cartoon & Animation Festival, sponsored by the Ministry of Culture, Sports and Tourism, and served as an executive at the Korea Association of Game Industry for three years since March 2002.

The lawmakers said that their review of the ministry’s records revealed that neither Kim’s current name, nor her name before she legally changed it (Kim Myeong-shin), were listed as a recipient of the award.

Kim did eventually serve for a year as an executive at the game industry association, which was founded in June 2004 — more than two years after the date Kim claimed she started working there.

Kim offered only an ambiguous apology for the claims on her 2007 résumé to Suwon Women’s University in a Tuesday evening interview with cable news channel YTN, saying she exaggerated her achievements out of her “desire to stand out.”

Kim also denied that she deliberately lied about her work experience at the game industry association. “You can choose to believe it or not, but I just didn’t remember [the exact dates].”

The candidate’s wife also protested the media and political examination of her career and academic credentials during the YTN interview.

“Why is this an issue, when I did not use the award for admission to a school?” she asked. “Why should I be subject to this kind of scrutiny for things that happened before my marriage to Yoon?”

However, Kim struck a more contrite tone when she spoke to reporters on her way to work Wednesday, after additional suspicions about her 2013 résumé were raised by the DP lawmakers.

“I intend to apologize to the people for causing distress,” Kim said as she arrived at the office of Kovana Contents, her company that specializes in art exhibitions.

Yoon’s campaign headquarters defended Kim through a press release, saying Kim mistook the years of her term at the game industry association, but the job experience is real.

“YTN reported that the positions on Kim’s résumé are fabricated job experiences and false award records, but that is different from the truth,” a camp spokesperson said.

PPP leader Lee Jun-seok also came to the defense of Kim in a radio interview with MBC on Tuesday, arguing that Kim’s résumé submissions should be considered separately from Yoon’s integrity as a candidate.

“It is important to remember that the [résumé submissions] took place well before the candidate’s marriage,” Lee said.

“A certain amount of criticism is fair if a presidential candidate fails to stop his wife’s misdeeds after they were married, but it is excessive to blame the candidate for things that happened before his marriage," he noted.

The DP appeared to go on a full offensive against the PPP presidential candidate following the revelation of additional irregularities in his wife’s résumés.

At a party campaign meeting on Wednesday, DP supreme council member and lawmaker Kim Young-bae suggested that Yoon was attempting to shield his wife from the allegations and the couple were jointly engaged in a campaign of fraud regarding Kim’s career credentials.

“Candidate Yoon and PPP leader Lee are driving a stake in the hearts of youth applying to jobs by closing ranks and shielding a falsified résumé,” Kim said. “Is this the kind of justice and fairness that they claim to uphold?”