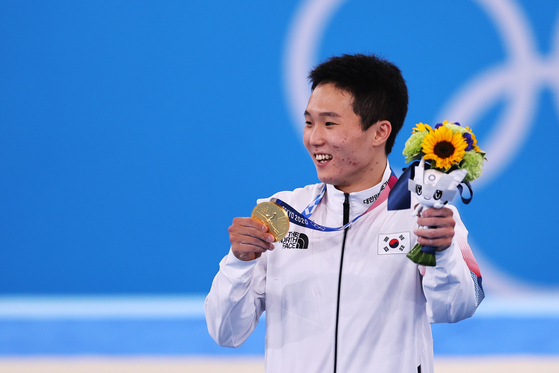 Shin Jae-hwan celebrates winning the gold medal in the men’s individual competition at the 2020 Tokyo Olympics on Aug. 1 in Tokyo. [JOINT PRESS CORPS]

According to the Daejeon Yuseong Police Station, the taxi driver called the police at 1 a.m. Wednesday to report that Shin drunkenly assaulted the driver physically when he asked Shin for his destination. Shin was heavily intoxicated at the time and did not go in for an investigation as he was unfit for an official investigation.

Shin won the men’s vault gold medal at the Tokyo Olympics in August and became the second Korean ever to receive a gold medal in gymnastics. Shin made his Olympic debut in Tokyo.

The 23-year-old made his professional debut in 2019 at the Zhaoqing World Cup, where he won silver, and went on to win two gold medals at world cup events after that. Shin is currently the world No. 2 in men's vault. His personal story on how he overcame a major back surgery and won added to his popularity.

However, following the incident, it was revealed by his coach that Shin had suffered from panic disorder. He had symptoms going into the Games, but his conditions worsened afterward to the extent that, though he had gone to compete in the World Championships in Japan in October, he had to withdraw.

Shin also failed to make the Korean national team at its selection competition held in Yanggu, Gangwon, from Nov. 10 to 11 because he withdrew after his first try at the men’s vault event. According to other gymnasts, Shin was visibly shaken and in bad shape at the competition and left with a performance score close to zero.

“This unfortunate incident [with the taxi driver] occurred in the middle of Shin’s recovery while he was receiving professional counseling for his panic disorder that had worsened since the Olympics,” said Lee Gwang-yeon, head coach of the Jecheon City gymnastics team which Shin is a part of.

“We had considered not competing because he had not fully recovered, but we decided together that it was a chance to face our fears and went for it.”

Shin will be called in later for further investigations.

The pandemic Olympics has begun (KOR)