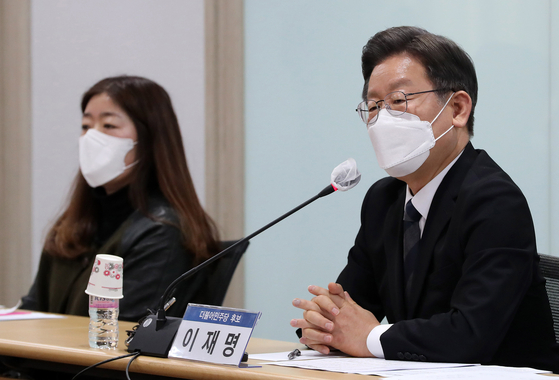 Lee Jae-myung, the ruling Democratic Party’s presidential candidate, speaks with small business owners and self-employed merchants at a meeting hosted by the Korea Federation of SMEs in Yeouido, western Seoul, on Monday. [NEWS1]

The promises included a Paycheck Protection Program, modeled after the U.S. government’s centerpiece relief program which provides forgivable loans to small businesses to help cover payroll costs, rent and some other fixed expenses during the pandemic.

Lee held a press briefing at the party’s headquarters in Yeouido, western Seoul, and said he plans to “pay people back for their sacrifices in a completely different way than before,” addressing the difficulties faced by small businesses forced to comply with strict Covid-19 government social distancing regulations.

The former Gyeonggi governor called for a change in paradigm and said that small business owners and self-employed merchants would be compensated pre-emptively through a “full financial support” method rather than the current “partial financial support” system paid after the damages are incurred.

“All the people who have been harmed will be compensated,” he said, adding that financial support should be “provided directly to the victims.”

He said he plans to introduce a Korean-style Paycheck Protection Program to help cover “fixed costs such as rent and personnel expenses that occur regardless of revenue.”

He pledged to issue 50 trillion won ($41.9 billion) in “local currency,” or regional prepaid cards, annually during his term if he is elected and hand out shopping coupons to spend exclusively on small businesses.

Lee said that loans to individual businesses increased by 170 trillion won due to the Covid-19 outbreak and added that the government should enable debt adjustment by purchasing the debts of small business owners and self-employed people who are in danger of delinquency.

He said he would provide a “grand amnesty” to restore credit ratings for small business owners and self-employed people.

He promised a ban on forced evictions and said landlords would not be allowed to terminate contracts or refuse contract renewals should tenants fail to pay their rent on time in an emergency situation like the pandemic.

“In principle, we will provide support pre-emptively, at the right place and right time when there is urgency and difficulty, not after a store’s doors are shut,” said Lee. “Through completely changing the paradigm of support and compensation, we will innovate more speedily with more helpful support.”

He also met with small business owners at the Korea Federation of SMEs in Seoul later that day to explain his pledges.