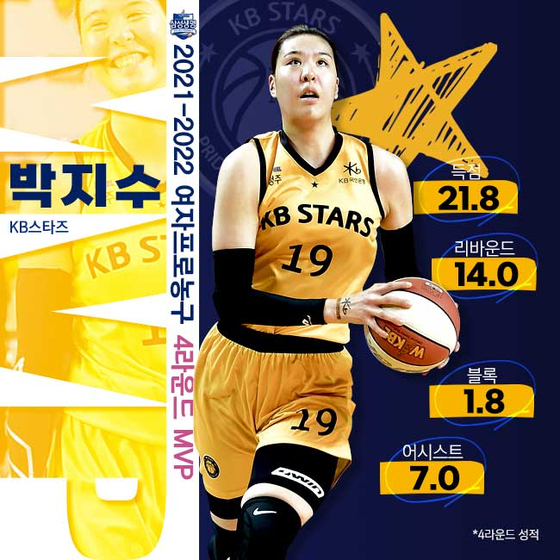 Park Ji-su was named MVP of the fourth round of the 2021-22 Women’s Korean Basketball League (WKBL) season on Tuesday. [YONHAP]


Park Ji-su of the Cheongju KB Stars was named MVP of the fourth round of the 2021-22 Women’s Korean Basketball League (WKBL) season on Tuesday, becoming the first player in WKBL to win the MPV title 13 times.

The WKBL season consists of six rounds of five matches, with one player named MVP at the end of each round. The season MVP will be named after all six rounds of regular season matches are finished. All six clubs — Yongin Samsung Life Blueminx, Incheon Shinhan Bank S-Birds, Asan Woori Bank Wibee, Bucheon Hana 1Q Woman's Basketball Team, Busan BNK Sum and Cheongju KB Stars— play 30 games, facing each other six times in the regular season.

Park won her 13th title on Tuesday receiving 38 of 76 media votes, 12 more than teammate Kang Lee-seul, who received 24 votes. Park has now been named MVP in three out of four rounds of the WKBL so far this season.

Park currently tops the league in terms of average points: 21.65 points per match and 14.3 rebounds her match.

At just 22-years-old, Park is already one of the biggest names in the WKBL and one of the few players ever to have concurrent careers in both Korea and the United States. Park was drafted into the WNBA when she was only 19-years-old, becoming the first Korean player to enter the U.S. league in 15 years, after Jung Sung-min, who was picked by the Seattle Storm in 2003.

Last August, Park jetted in from the United States to play for the Korean national team at the 2020 Tokyo Summer Games as Korea made it to the Olympics for the first time in 13 years. Korea lost to world No. 3 Spain, No. 4 Canada and No. 8 Serbia. 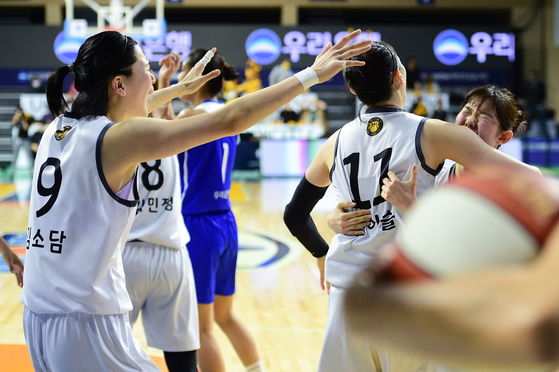 
Now in the WKBL, Park is leading the KB Stars to a season victory. The last time the KB Stars won the trophy was in the 2018-19 season.

This season, the KB Stars are looking like the team to beat, having opened the season by winning their first nine matches straight, matching the club's longest winning streak. Even after the Asan Woori Bank Wibee cut that streak short, the Stars were undeterred and have now extended the club's longest winning streak to 10 matches. The KB Stars could even win the trophy with the highest winning rate in the league's history.

Woori Bank currently hold the record for winning rate, recording a .943 rate in the 2016-17 season with 33 wins and two losses. At the time, each WKBL club played 40 games. The runners-up are Shinhan Bank with a winning rate of .925.

The highest winning rate the KB Stars have ever reached is .800 in the 2018-19 season, when they won 28 matches and lost seven to take the title. If the Stars win five more matches, they will break their own team record.

The KB Stars will next face Bucheon Hana 1Q at home on Friday then face Incheon Shinhan Bank S-Birds on Sunday.