In a press conference held on Monday, the cast of “Single’s Inferno” shared some behind the scenes secrets and what to look out for while watching the show.

Netflix unveiled the first two episodes of the series on Dec. 18. It is about “flirty singles [searching] for love on a deserted island, [where] they can only escape as couples.” A total of nine attractive singles — five men and four women — will go on a quest to find love.

The show takes place in the summer, where they arrive on a stranded island. They are notified that they will be living with each other for nine days. The island is divided into two: “Inferno” and “Paradise.” Like their names, “Inferno” is a raw and exotic environment; while “Paradise” allows the contestants to enjoy a date in the luxury of a high-end hotel suite. To get to Paradise, you must find your match in Inferno.

Producer Kim Jae-won, whose previous works include JTBC’s television comedy program “Just Comedy” (2020) and the second season of JTBC’s television travel reality show “Traveler” (2020), worked hand in hand with producer Kim Na-hyun, known for JTBC’s reality talk show “Don’t be the First One” (2020-21). “Single’s Inferno” was made in collaboration by JTBC and Netflix. 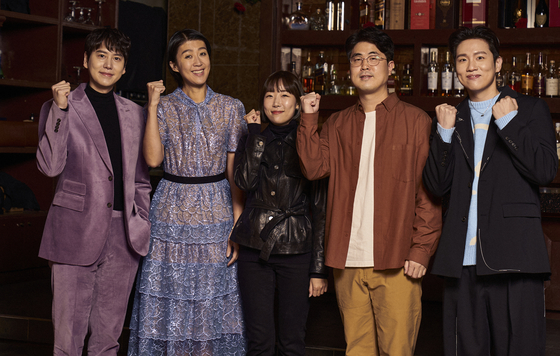 
Kim Jae-won, a reality show enthusiast himself, produced the show.

“When we were planning for the show last year, there weren’t many dating reality shows airing at the time,” Kim said. “So I decided to produce one myself. A secluded island may be a harsh environment but there is also beauty to it. It provides opportunities for romance so I thought I would give it a try.

“There have been many entertaining dating programs that aired this year. But ‘Single’s Inferno’ has its own charm. I highly recommend watching until the end.”

Model Hong Jin-kyung, actor Lee Da-hee, Kyuhyun of boy band Super Junior and rapper Hanhae serve on the panel on the show. They try to guess what each contestant is thinking, and who they are attracted to.

“The real fun begins in episode three,” Hong said. “We [the panel] were so immersed watching the contestants, it was like watching the show from our own home. Dating shows are so addictive. There may be people who have never watched a single episode, but I guarantee no one has ever stopped after watching the first episode."

“There is a huge twist,” Kyuhyun said. “I’ve rarely watched dating shows, but this one got me hooked. I’m all for dating shows now. I’ve been watching both local and foreign dating shows.”

“The program gets really interesting toward the end. The contestants show the raw sides to themselves,” said Hanhae.

Hong, left, and actor Lee Da-hee serve as panels for the show. [NETFLIX]


The four panelists each show their different personalities, adding flavor to the show.

“All four celebrities have different traits,” said producer Kim Na-hyun. “Hong is the one who gets too absorbed in the show, Lee tends to empathize with the contestants, Kyuhyun is the smart observer and Hanhae is the analyzer. They all fit well on a dating reality show.”

Major television channels and over-the-top (OTT) services have been releasing a number of dating reality shows, and it seems that “Single’s Inferno” needs a breakthrough strategy to stand out among them.

“The space itself is distinctive,” Kim Na-hyun said. “There’s an island called ‘Inferno,’ where the scorching sun directly shines. Then we have the luxurious ‘Paradise.’ There’s a significant change in atmosphere when going from one island to another.

“The contestants of the show also have this common found self-confidence,” she added. “When we were casting them, we looked for their confidence. These people know their self-worth and are frank when expressing how they feel. Their own emotions and the stories they have are straightforward and honest. This show develops its narrative faster than other shows too. Each episode isn’t too long [about 60 minutes] and it’s compressed. It’s a ‘hot pink’ dating program filled with hot and freehearted people.” 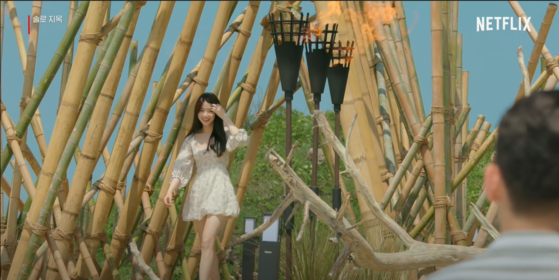 
“There are two classics when it comes to dating shows in Korea,” Kim Jae-won said. “[SBS’s 2011-14 matchmaking program] ‘Jjak’ and [Channel A’s 2017-20 dating reality show] ‘Heart Signal.’ I really enjoyed both shows, and I wanted to fuse the merits of both shows as much as we could to create a great new show.”

“Single’s Inferno” is known to be similar to “Too Hot to Handle” (2020-), an American-British dating reality show also released on Netflix. “Too Hot to Handle” is known for its raunchy premise of gorgeous singles living together for four weeks but they must refrain from any intimate physical contact with one another to win a grand prize of $100,000.

“The producers aren’t too concerned with the degrees of steaminess on the show,” Kim Jae-won said. “It’s up to the contestants. The program is broadcasted on an OTT platform so we’re open to all chances. Whatever you do — pretty much all of it is going to make it on the screen. So do whatever you’d like. It’s fine however. Viewers will get a glimpse at some physical affection never before seen on other local dating shows.”

“I think it’s even better to watch the show by pretending to be in the contestants’ shoes,” Hong said. “Don’t analyze. Just put your heart into it. It’s a wild ride. You’ll be in for a treat.”