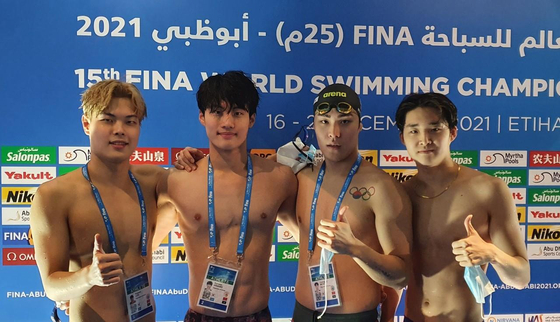 
Hwang Sun-woo finished sixth in the men's 100-meter freestyle final at the FINA World Short Course Swimming Championships in Abu Dhabi, the United Arab Emirates, on Tuesday afternoon. Despite missing out on a medal, Hwang set a new Korean record at 46:34 seconds.

Hwang was the only Asian swimmer to reach the final of the men's 100-meter freestyle. Hwang had the fastest start, but fell back in the first 50 meters and finished sixth with a time of 46:34 seconds, 0.12 seconds ahead of his own Korean record.

Hwang set the previous record at the FINA Swimming World Cup in Doha, Qata in October, swimming a time of 46:46. He also swam a time of 46:46 in the semifinal race this time around to finish fifth out of 16 swimmers in the semis en route to the medal race.

At the Olympics, Hwang reached the 100-meter freestyle final, marking the first time a Korean has reached the final on the big stage.

Hwang ends his season on great form, having already won gold in the men's 200-meter freestyle on Friday and set a new Korean record in the men's 100-meter medley semifinal on Saturday.