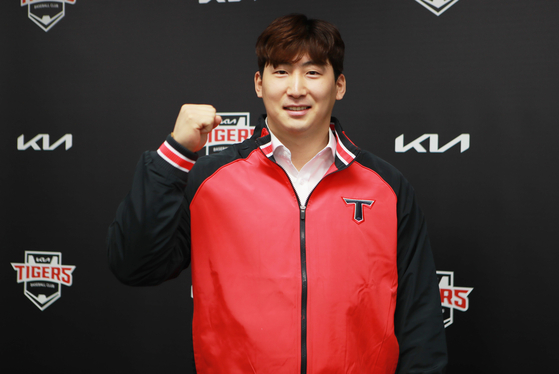 
The Kia Tigers on Thursday signed outfielder Na Sung-bum on a six-year-deal worth 15 billion won ($12.6 million).

With the deal, Na, an All-Star outfielder considered the biggest name in this year's free agent market, has tied the KBO record for the most-lucrative contract, alongside Lee Dae-ho of the Lotte Giants.

The move also effectively removes Na, who has long been considered a possible MLB prospect, from major league contention. At 32 years old now, Na will be with Kia until he is 38 years old and will, presumably, retire in the KBO.

Na debuted with the Dinos in 2013, having chosen to attend university before joining the KBO. He almost immediately established himself as the franchise star, batting .312 with 1,330 hits, 830 RBIs and 212 home runs over nine years with the club.

Na's bat has been particularly hot in the last couple of seasons, with 34 home runs in 2020 and 33 home runs this year. That 33 long balls brings Na in at exactly 50 percent of the total 66 home runs that the entire Tigers squad managed last season.

"I sincerely thank the Tigers for their interest and appreciation of my value," Na was quoted as saying in a Kia press release. "I'll try to adapt to the team as soon as possible and get closer to the coach, coaching staff and players, and, above all, I'll become a more helpful player for the team and the squad, both on and off the field."

"I sincerely thank the Dinos for helming me grow and develop," he said "I was able to grow this much thanks to the club and the fans. I'm sorry to the fans who will be sad that I'm gone, but I'll never forget them."


Na's signing comes as the Tigers are still struggling to agree terms with former franchise star Yang Hyeon-jong, who returned from the majors this winter.