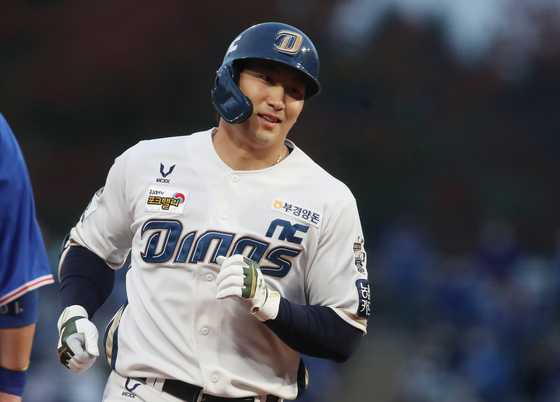 
NC Dinos slugger Na Sung-bum's annual efforts to find a new home in the majors look set to continue this offseason, as the KBO revealed Friday that they have received a status request on the outfielder.

A status request is the earliest signal that a major league club is interested in a Korean player. The process — essentially a formality — sees the MLB officially ask the KBO to report on the status of a player, without revealing which club is interested in them. The KBO has four days to respond, in this case notifying the MLB that Na plays for the Dinos.

Na will be a free agent in the KBO this season, but for an international move he will still need to go through the posting system. Under those rules, a MLB team will have 30 days within which to negotiate with him.

Na was originally hoping to head to the majors after the 2020 season through the posting system, but failed to find a big league club to sign within the 30-day signing period.

This came as a huge blow to Na, who had hoped to head to the majors after the 2019 season. However, as he had to skip almost all of that year due to a knee injury incurred while stealing a base, Na had to postpone his plan.

Na debuted in 2013 and has played his entire career with the Dinos. In nine seasons with the club, he has a career .312 batting average with 830 RBIs and 212 home runs. He has hit over 20 home runs seven times and over 30 three times, as well as over 100 RBIs five times in this career.