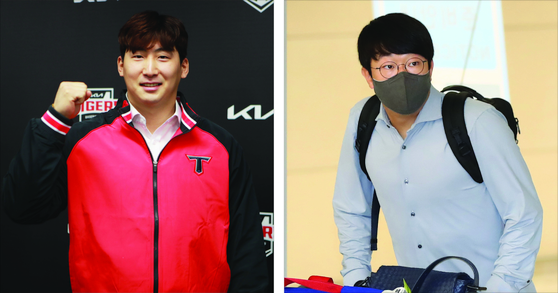 
The Kia Tigers on Thursday signed All-Star outfielder Na Sung-bum to a KBO record-tying contract, just a day after they again failed to finalize a deal to bring back former franchise star and fan favorite Yang Hyeon-jong.

The Tigers on Thursday signed Na to a six-year-deal worth 15 billion won ($12.6 million). Na, formerly of the NC Dinos, will earn 6 billion won in guaranteed salary spread over the six years with 3 billion won in incentives. He will receive a 6 billion won signing bonus.

With the deal, Na, an All-Star outfielder considered the biggest name in this year's free agent market, has tied the KBO record for the most-lucrative contract, alongside Lee Dae-ho of the Lotte Giants.

The move also effectively removes Na, who has long been considered a possible MLB prospect, from major league contention. At 32 years old now, Na will be with Kia until he is 38 years old and will, presumably, retire in the KBO.

Na debuted with the Dinos in 2013, having chosen to attend university before joining the KBO. He almost immediately established himself as the franchise star, batting .312 with 1,330 hits, 830 RBIs and 212 home runs over nine years with the club.

Na's bat has been particularly hot in the last couple of seasons, with 34 home runs in 2020 and 33 home runs this year. That 33 long balls brings Na in at exactly 50 percent of the total 66 home runs that the entire Tigers squad managed last season.

But Na's arrival comes less than a day after the JoongAng Ilbo reported that the Tigers had again failed to get former ace Yang to sign on the dotted line despite five rounds of negotiations.

The Tigers are reportedly offering Yang a deal worth worth 10 billion won ($8.4 million) for four years, but whatever the terms of that deal are, Yang and his representatives clearly don't think they are favorable.

After playing his entire career in Gwangju, Yang left the Tigers last year in favor of a minor league deal with the Texas Rangers, where he hoped to break into the big leagues and make a name for himself. He ended up having a rollercoaster year, shuttling between the majors and minors in the Rangers farm system and ended the season with 12 major league appearances, a 5.60 ERA, three losses and an expired one-year contract.