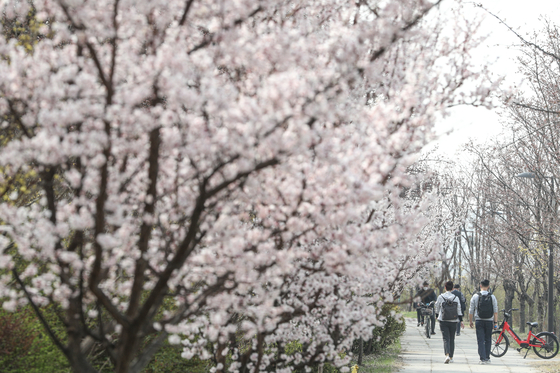 People stroll along the road in Yeouido, western Seoul, as cherry blossoms begin to bloom Friday. The government will implement special quarantine measures to limit springtime outdoor activities from Saturday to the end of next month, and the Seoul city government canceled popular cherry blossom festivals. [NEWS1]


The government Friday decided to extend the current social distancing scheme for another two weeks as it struggles to bring down Covid-19 infections, with Korea’s daily patients nearing 500 and total cases surging above 100,000.

The Central Disaster and Safety Countermeasure Headquarters said it will additionally designate a special quarantine period to discourage springtime outings from Saturday through April 30.

Health authorities will strengthen inspections of major parks, recreational forests, amusement parks and regional festivals nationwide to prevent the congestion of people and spread of infections through springtime outings such as flower-viewing festivals.

The government will ask local festival organizers to refrain from holding festivals and for parks and outdoor recreational areas to limit capacity. It will also strengthen monitoring of chartered buses, rest stops and tourist areas.

The Seoul Metropolitan Government canceled 17 flower-viewing events out of 23 scheduled for the springtime, including cherry blossom festivals in Yeouido, western Seoul, and at Seokchon Lake in eastern Seoul.

Some festival organizers are offering limited attendance for the events through a registration process or online viewing of the cherry blossoms.

The government said that the current social distancing measures will be extended to April 11, including a ban on gatherings of five or more people first introduced on Dec. 24.

The government currently has in place Level 2 social distancing measures, the third highest in the country's five-tier system, implemented in the greater Seoul area and Level 1.5 in other regions.

Restaurants, cafes, fitness centers and other businesses will continue to have their operation hours restricted to 10 p.m. for two more weeks.

Korea reported 494 new daily cases, including 471 local infections, raising the total patients to 100,770 as of Thursday midnight, according to the Korea Disease Control and Prevention Agency (KDCA) Friday.

This marked the highest number of daily cases in 31 days as health authorities continue to see increased mobility of people with the warmer spring weather.

The daily average domestic cases for the past week was 414, within the range of Level 2.5 social distancing measures.

Of local transmissions, 70 percent were in the metropolitan area with, 121 cases reported in Seoul, 187 in Gyeonggi and 28 in Incheon.

There were 23 imported cases, including eight from the United States, three from Pakistan and two from the Philippines.

A total of 767,451 people have been given Covid-19 vaccines as of Thursday midnight, or around 1.5 percent of the country's population.

All elderly people 75 and over will be eligible to get vaccinated starting April.