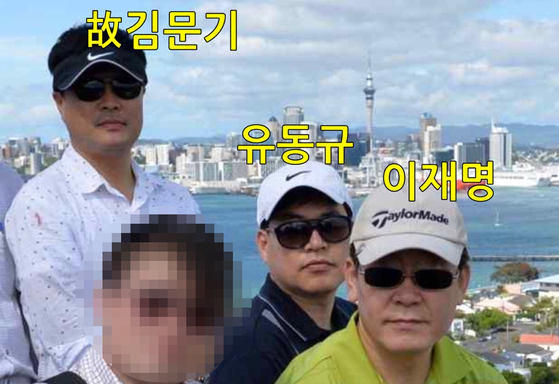 
Ruling Democratic Party (DP) presidential candidate Lee Jae-myung faced heightened accusations from the main opposition party over the weekend that he attempted to whitewash his ties to a dead Seongnam Development Corporation official who was being questioned over his involvement in the Daejang-dong development corruption scandal.

The DP candidate denied ever knowing Kim Moon-gi, who was discovered dead in his office on Wednesday evening. However, it was discovered that the main opposition People Power Party (PPP) lawmaker Kim Eun-hye had posted a photo of an award Lee presented to Kim for his work at the city developer in 2015, back when Lee was Seongnam’s mayor and around the time that the controversial Daejang-dong development was launched.

Revelations about the award came after PPP Seongnam city council member Lee Gi-in posted a photo of the two in Australia in 2015 on a business trip.

Kim Eun-hye accused the DP candidate of trying to pass the blame onto those who worked directly on the project, which she claimed he masterminded.

“Lee may have turned his back on [Kim’s] family, but Seongnam’s municipal records show the truth.”

The award cites Kim Moon-gi’s contribution to making the Seongnam Development Corporation “a company that realizes the dreams and vision of the people of Seongnam” as the background for the mayor’s recognition.

According to the PPP lawmaker, nine other employees who had worked at the city developer for at least two years received the same award after being vetted by a nomination committee.

Kim’s nomination listed his contribution to the Daejang-dong development and the Wirye New Town development as the main reasons for his being commended for the award from the mayor.

The nomination further cites Kim’s work on the committee which oversaw bids from private investors in the Daejang-dong development.

Kim was the chief of the Seongnam Development Corporation’s project development division when the Daejang-dong development was launched.

Appointed to the post by Yoo Dong-gyu, the company’s former acting president who was indicted in November for breach of trust and bribery in connection with the project, Kim faced suspicion that he was one of those trusted by Yoo to carry out the development in line with his wishes.

As one of the committee members who evaluated the multi-company bid led by Hana Bank, which included Hwacheon Daeyu, to participate in the project, Kim reviewed bids for the project and later served as an executive in the mixed private-public consortium Seongnam Garden, which spearheaded the project and in which the city developer held a 50 percent stake.

Prosecutors' interest in Kim’s involvement in the project focused on the fact the city developer did not include a customary excess profit restitution clause in either the bidding guidelines or the investment contract.

Senior PPP campaign spokesman Cha Seung-hoon blasted Lee for having “selective memory” regarding Kim, who traveled with the DP candidate to Australia and New Zealand in 2015 despite not being involved in the trip’s focus, which was on the feasibility of developing a tram system in Seongnam, Gyeonggi.

“Lee claims that he has Kim’s mobile number saved on his phone but says he has no memory of knowing him,” Cha said. “It’s almost as though Lee has no memory of anything regarding Kim that may be of political disadvantage to himself.”