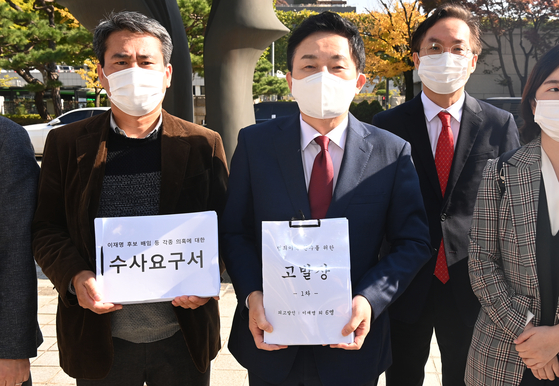 
The state prosecution service faces criticism for serving an unusually short indictment that altered or omitted key charges against a central figure in the snowballing Daejang-dong development scandal in Seongnam, Gyeonggi, as investigators continued their raids on Seongnam city hall on Monday.

The eight-page indictment notice not only changed the purpose of one bribe listed in the arrest warrant request for Yoo Dong-gyu, a former acting president of the Seongnam Development Corporation, but substantially reduced the amount of money he is accused of receiving while deleting politically explosive accusations contained in the original warrant.

In the arrest warrant obtained from the Seoul Central District Court on Oct. 3, Yoo was accused of receiving 300 million won ($253,000) from Jeong Jae-chang, owner of the Wirye Asset Management company.

However, in the indictment served by the Seoul Central District Prosecutors' Office on Thursday, Yoo instead faced the charge of accepting 352 million won from Nam Wook, a lawyer implicated in the scandal.

Nam is currently undergoing investigation by the state prosecution service.

Furthermore, the charge that Yoo received 500 million won as a bribe from Kim Man-bae, owner of asset management company Hwacheon Daeyu, was omitted entirely from the indictment notice.

Since 2019, Hwacheon Daeyu allegedly raked in a profit of 57.7 billion won on an investment of 49.95 million won — a mere 1 percent stake in the project — raising suspicions that the company benefitted from connections to current Democratic Party presidential candidate Lee Jae-myung, who was Seongnam mayor at the time the project launched.

Both Yoo and Kim have attracted attention as Lee's acquaintances. Yoo is also a former aide to Lee and worked with him on both his mayoral and gubernatorial campaigns, while Kim is a former journalist who interviewed Lee back in 2014.

The indictment served by the prosecution service essentially removed most charges against Yoo that he manipulated the investment and profit design of the project to favor Hwacheon Daeyu and its Cheonhwa Dongin affiliates.

Although the Oct. 3 arrest warrant accused Yoo of committing breach of trust under the Special Economic Crimes Act and causing 10 billion won in damages to the Seongnam city government by favoring certain private companies in the profit distribution and shareholder composition of the development consortium, that charge was omitted from the indictment.

Also gone was the accusation that Yoo forced the Seongnam Development Corporation division tasked with drafting the investment contract to delete a clause that would have limited the profits that private investors could reap from the project.

Other notable omissions in the Thursday indictment compared to the Oct. 3 arrest warrant included the charge that Yoo was promised 25 percent of Hwacheon Daeyu's profits from the Daejang-dong development in return for getting the company a spot as an investor in the project.

The omission of the most politically contentious charges against Yoo led to criticism that prosecutors were trying to avoid implicating Lee in the scandal, with the main opposition People Power Party accusing prosecutors of conducting a politically-biased investigation.

Lawyer Kim Jong-min, who was previously chief of the Suncheon District Prosecutors' Office, suggested that state prosecutors were "trying to avoid [addressing] Gov. Lee Jae-myung's alleged breach of trust," and said that the effect of politics "has never been this explicit since the prosecution service was founded."

Regarding the altered and omitted charges, an official at the state prosecution service told the JoongAng Ilbo on the condition of anonymity that prosecutors wrote an indictment "based on recordings of conversations submitted by Nam and accountant Jeong Young-hak, but the investigation appears to have failed to uncover into specific evidence to support the credibility of the charges."

Jeong, who is the owner of Hwacheon Daeyu affiliate Cheonhwa Dongin No. 5, submitted 19 recordings of conversations between Kim and Yoo discussing profit distribution from the project to the state prosecution service late last month.

The official suggested that given the lack of concrete evidence to support the suspicions raised by the recordings, along with prosecutors' failure to obtain an arrest warrant fro Kim, they were forced to change their indictment of Yoo to only include bribery charges, and not breach of trust, which he called "the [logical] starting point of the allegations of political favors in the Daejang-dong project."